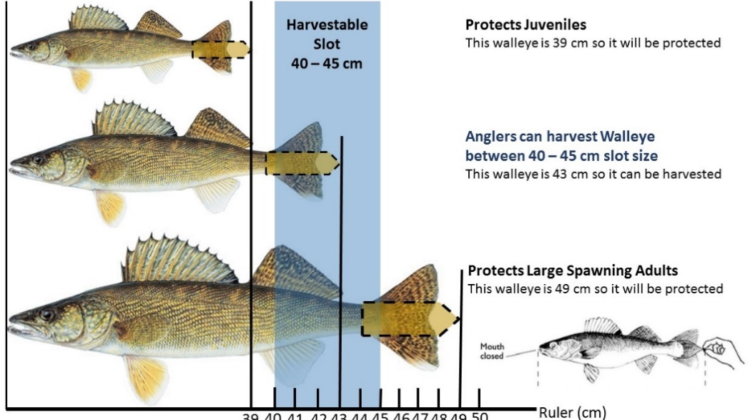 An example of the proposed harvestable slot size (Photo supplied by: Ministry of Natural Resources and Forestry)

The province is considering changing fishing regulations on Lake Nipissing and wants your feedback.

The proposed regulation changes for walleye are:

Fisheries surveys indicate that the regulation changes made in 2014 (minimum harvestable size limit of 46 centimetres (18 inches) protected a significant number of juvenile walleye.

Numbers show there is a statistically significant long-term (approximately 10 years) increasing trend in kilograms of walleye in Lake Nipissing. However, fisheries assessment shows that walleye growth has slowed, with multiple year classes building up below the minimum size limit of 46 centimetres.

The MNRF says the proposed harvestable slot size of 40 to 45 centimetres is the next step towards recovering the population by providing protection for the juvenile and mature walleye.

For pike, the  proposed changes are:

The MNRF says it has conducted a northern pike data review compiling fisheries information from 1967 to 2018. The review showed the population has declined significantly over the past two decades, which strongly suggests that over-harvesting has occurred.

“The current recreational fishing regulations are not meeting the objective of maintaining a sustainable northern pike fishery. The proposed protected slot size or maximum size limit regulations will protect large mature pike and help to rebuild the population,” reads the MNRF report.

The MNRF says it wants to protect muskellunge and their reproductive potential in Lake Nipissing, and they say there has been interest expressed by stakeholders to implement a size-based regulation to protect and maintain the value of this world-class muskellunge fishery.

For small and largemouth bass, the proposed changes are:

The MNRF’s report says the abundance of smallmouth bass captured during annual assessment surveys has more than tripled over the last two decades.

“In 2014, the bass season on lake Nipissing opened one week earlier than previous years (3rd Saturday in June to November 30). This regulation change was to encourage anglers to fish for an alternative species from walleye, recognizing that Lake Nipissing has a diverse fishery,” it reads.

This change created additional angling opportunities and promoted bass as a quality sport fish species. Since the 2014 season change, more anglers are targeting bass, and anglers have experienced better angling success for the species.

“We are confident that increased opportunities for anglers to target bass exist and will likely not impact the sustainability of bass populations in Lake Nipissing. Focusing more fishing effort on bass will likely have a positive benefit for the recovering walleye population,” reads the report. “Annual monitoring on Lake Nipissing will continue to provide information on bass populations and allow us to re-assess if regulations are sustainable.”

To read the whole report, click here. The province is looking for feedback on the proposed changes, and comments will be accepted until May 11th. Residents can send their comments by email to MNRF.NOR@ontario.ca.