Number of turtles struck by vehicles in Ontario down in 2020, but turtle activist says number is still too high 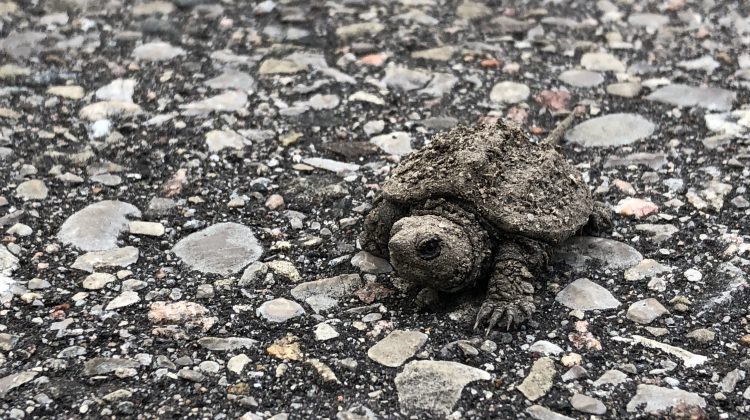 According to the Ontario Turtle Conservation Centre, (OTCC) 1,097 turtles were admitted in 2020, which is down from 2019, but a local turtle activist says that number is still too high.

“We didn’t expect it to be anywhere near that,” the founder of the Think Turtle Conservation Initiative Kelly Wallace tells the MyMuskokaNow.com newsroom. In 2019, 1,498 were admitted to the OTCC’s turtle hospital. Wallace says the prevailing thought amongst turtle experts in Ontario was that there would be a larger drop in turtles needing emergency care after being struck by a vehicle.

Wallace says while statistics from the OPP show that traffic was down over the last 12 months, it didn’t go down as much as she thought it would. She says that’s likely why the number of turtles needing care didn’t drop as much as she predicted it would. “Last year was a very difficult year for everybody, but it’s so important to be mindful of the wildlife that we share the roads with,” Wallace adds.

Even though she’s disappointed to see the number of turtles admitted to OTCC’s turtle hospital still high, it did drop, so Wallace is hopeful the positive trend continues this year.

If you are driving, you might come across a turtle attempting to get to the other side of the road. “We’ve actually been seeing the little turtles showing up sooner,” she says, adding that they usually start to show up in May. Wallace says to be on the lookout for them if you’re working on your lawn or garden, and especially if you’re driving. “They’re just sort of everywhere,” she says. A commonplace for nests is beside the road. “We have had confirmed sightings of them crossing roads,” she says.

It’s easy to spot the larger turtles as they make their slow journey across the road, but Wallace points out that it’s hard to notice the younger ones.

If you do pull over to help one across the road, she says the most important thing to remember is to always move the turtle in the direction they are pointing, even if it’s away from a body of water. “They always move with a mission,” she explains.

For snapping turtles, it’s not as simple. Wallace says if you want to make a habit of helping turtles, it’s a good idea to keep things like towels, a pair of gloves, and a safety vest in your car. The towel and gloves come in handy for snapping turtles. She explains you need to put the towel over the back of the turtle’s shell to protect you from getting scratched. If you’re helping hatchlings across the road, Wallace says to bring them to the nearest body of water and ensure they’re surrounded by vegetation so they can hide and rest.

This year, Wallace says she and other turtle groups are making a “concerted effort” to get more signs on the roads to make sure people are aware of where turtles are crossing. “Every year awareness is increasing,” she says. If you have questions about what you can do to help, call the Think Turtle Conservation Initiative at 647-606-9537. If you spot an injured turtle, call OTCC at 705-741-5000.