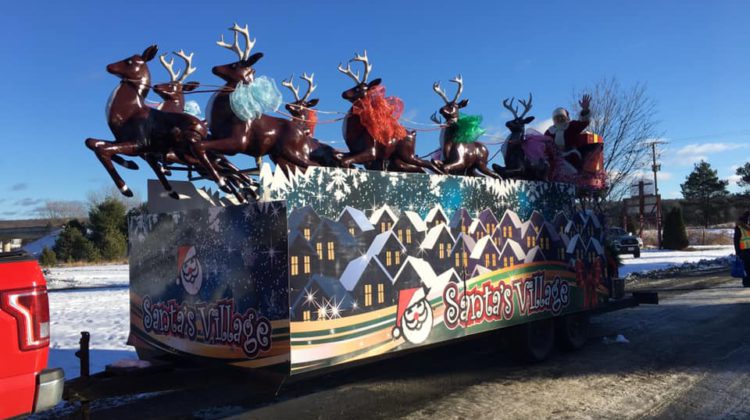 Santa Claus was waiting at the end of the parade route for those that came through (Photo supplied by: Bracebridge Rotary Santa Claus Parade on Facebook)

Nearly 1,000 people drove through the Bracebridge Fairgrounds for the Rotary Club of Bracebridge and Muskoka Lakes’ first attempt at a drive-through Santa Claus parade.

“It went well,” Organizer Don MacKay says of this past weekend’s parade. “My judge of how well it went was standing by Santa and seeing all the smiles head to the exit.”

Floats were set-up along the 500-meter route with Santa and Mrs. Claus waiting to greet attendees at the end.

MacKay credits the OPP for the work they did marshalling people in and out of the Fairgrounds during the three-hour parade. When the parade ended, he says there were around 100 cars that had to be turned away. “We’d still be there today if we just let it run,” he says. “I committed to the people in the parade we would be done by 4.” He says that by the time they did cut off the parade, it was beginning to get darker and colder.

At the entrance to the Fairgrounds, people had the option to drop off a donation. MacKay says over $3,000 was donated. “We will now dispense that out in the community,” he says, adding that it will be done in time for Christmas.

The usual parade route takes place in downtown Bracebridge. “This year we had 500 metres to work with,” MacKay says. He credits the work done by the other Rotarians, and everyone that set-up a float and went “above and beyond.” He says those that made floats wanted to make sure this was special. There were plenty of cars packed full of kids, which MacKay says he was happy to see.

“It’s our first time doing something like this,” he says.

“Hopefully the wait was worth it,” MacKay adds. “For those that didn’t, my apologies, we were overwhelmed with our own success and we couldn’t go any further.”