Marc Gagnon Steps Down As Coach Of Huntsville Otters 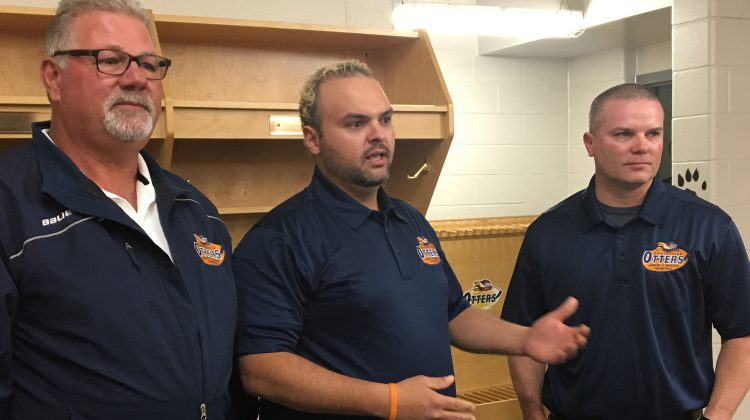 Marc Gagnon (right) was brought in back in 2017. Supplied by Taylor Ablett, Moose FM.

It looks like the Huntsville Otters will have a new face behind the bench when they return to the ice next season.

After three seasons with the team, Marc Gagnon is stepping down from his role as Head Coach of the Junior C squad in order to join the staff of the North Central ‘AAA’ Predators – and he will also be joining the Otters’ player development department.

The departure comes after a down season for the Otters, who finished the campaign with a record 11-30-1.

In an interview with MyMuskokaNow, Gagnon says having gone from playing for the Huntsville Huskies year’s back – to coaching the Otters and now moving to player development – he feels his career has come full circle.

“It might sound crazy or something, but I just felt it was time. I’ve done the last three years, and once the season was over, I spoke to Glen – my boy, and it just felt like it was time. I don’t really have a reason or reasons – other than it was just time in my heart.”

When it comes to the organization, the community, the fans and the players, Gagnon adds he can’t thank them enough for allowing him the opportunity.

He says he’s extremely happy with all he’s managed to accomplish for hockey in Huntsville.

“Aside from bringing structure because I take a lot of pride in that and I work a lot at looking at systems and practice drills and whatnot; coaching my son Glen was pretty cool. And also the start of the relationship we developed with Huntsville Minor Hockey – which I feel is huge.”

Over half of the Otters roster consists of players who were born in or around Muskoka.

Gagnon says that he will be using his connections and knowledge of the local hockey community and applying them to his new role in player development.

“I could be cleaning the toilet bowls for the team. As long as I’m involved, I’m going to try hard and do whatever is asked of me. That’s how I am with everything, and I guess I will learn as I go.”

Meanwhile, there’s no word yet on who will replace Gagnon as the teams’ new bench boss for the 2020-21 season.