Huntsville Residents Stand In Solidarity Against Racial Injustices In Canada And U.S. 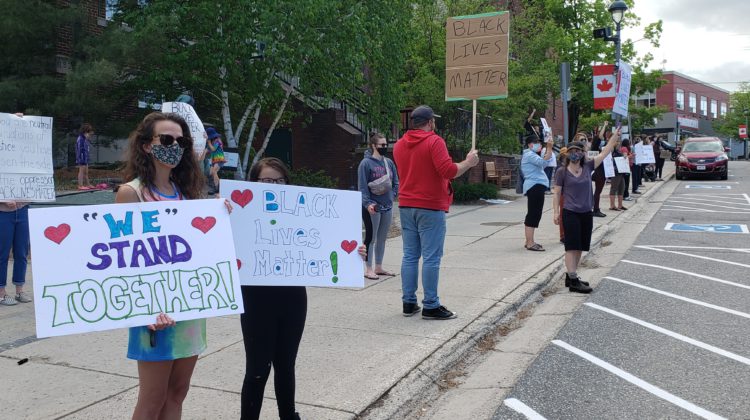 Dozens of Huntsville residents lined the streets to stand in solidarity with the Black Lives Matter movement.

On Wednesday, protesters took to the streets of downtown Huntsville to lend their support to those protesting in the United States – amid the aftermath of the killing of George Floyd.

Brothers Mason and Harper Smith were among the group of protestors, and they tell MyMuskokaNow why they feel the issue of systemic racism needs to be addressed.

“There’s obviously some systemic injustice and inequality in the U.S. and in Canada,” Mason said. “And there’s massive riots and protest in the U.S., and we are just supporting the cause because obviously change needs to happen.” 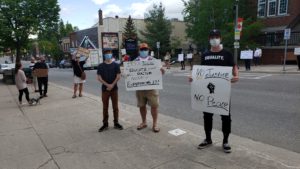 Many of the protestors involved were bearing signs with statements such as “Black Lives Matter,” “No Justice, No Peace,” “Silence is Violence,” and “We Stand Together”.

Harper adds the very least we can do as a community is to stand up for what we feel is right.

“We want to be doing everything we can while being up here in the North where we don’t have as many opportunities to help out as other people can. And being that some people don’t exactly have jobs can’t donate money to all these different charities so, we just want to stand our ground and support in whatever way we can.”

Many motorists honked their horns as they passed by in support of those protesting.

Mason says if there’s a message, he would like the community to take from their protesting – it’s that real change comes from within.

“This speaks to our nation as a whole,” Mason said. “Because when small communities come together and do things, it shows that our voices can still be heard regardless of where you are, and you can still make a difference – regardless of who you are.”

Huntsville is just one of many Canadian communities who’ve decided to stand up and speak out to the issue of systemic racism in the U.S. and in Canada.

Huntsville residents are lining the downtown area outside City Hall, protesting in solidarity of the #BlackLivesMatter movement amid recent racial injustices happening in the U.S. #Muskoka #HuntsvilleON pic.twitter.com/WPJTOuTVyb