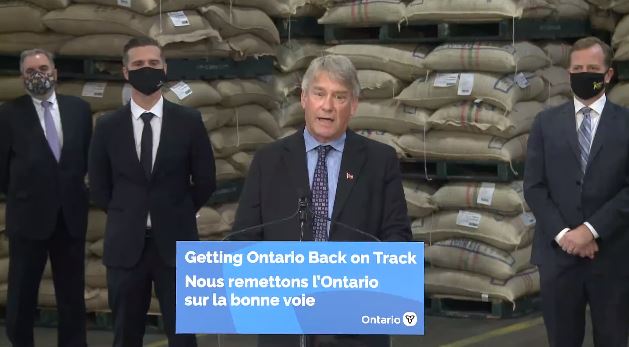 The focus of Ontario’s 2021 budget was on people’s health and the economy and Parry Sound-Muskoka MPP Norm Miller is happy many parts of the budget give his riding a boost.

“Without healthy people, we can’t have a healthy economy,” Miller says of the theme of this year’s budget. “Health and the economy go hand in hand.”

“The plan really is to grow the economy in the next number of years once we’re over COVID so we can eventually get back to balance by growing the economy,” he explains, noting that the province is “sparing no expense” to make sure the vaccine roll-out goes as quickly and smoothly as possible.

In the $186.1 billion budget, Miller highlights the Ontario Tourism and Hospitality Small Business Grant. He explains it will give one-time payments of $10,000 to $20,000 to businesses like hotels or amusement parks. “Tourism has been one of the hardest-hit industries,” he tells the MyMuskokaNow.com newsroom. A $150 million tax credit was also included in this year’s budget in hopes it encourages people to travel in Ontario.

Miller says that $5 million is being earmarked for planning and design work for Ontario Northland to bring passenger rail back to central and northern Ontario. In late February, Huntsville council joined councillors from North Bay in calling on Premier Doug Ford to bring back the Northlander train and reliable and affordable passenger rail transportation.

“COVID has made it really clear that broadband is essential with people learning and working at home,” Miller says. The government will be investing $2.8 billion in new spending to bring better internet access to Ontario by 2025. “I think that’s something that’s really positive,” Miller says on that part of the budget.

Also related to the pandemic, Miller says the province is continuing to work towards getting better care for long-term care and retirement home residents. An additional $1.8 billion is going to hospitals in Ontario and $650 million is budgeted for long-term care, these funding announcements were unveiled earlier this week prior to the budget being tabled. Miller says that more long-term care beds will be rolled out and within four years all seniors in homes will have access to four hours of direct care a day.

The Conservative budget was slammed by the leader of the Opposition, Andrea Horwath. In a statement Horwath said if this were an NDP budget it would have funded paid sick days and offered paid leave for workers to get the COVID-19 vaccination, “Ontarians deserved a budget that gave them help getting to the other side of the pandemic, and hope for a future they can look forward to.”

Meanwhile, teachers’ unions have slammed the Ford budget for a lack of spending on education. In a joint statement they claim the Ford government has failed to deliver a budget that keeps up with the rate of inflation and enrollment. The unions are calling on the province to invest in lower class sizes, enhanced safety measures, mental health support, and support for students with special education needs.