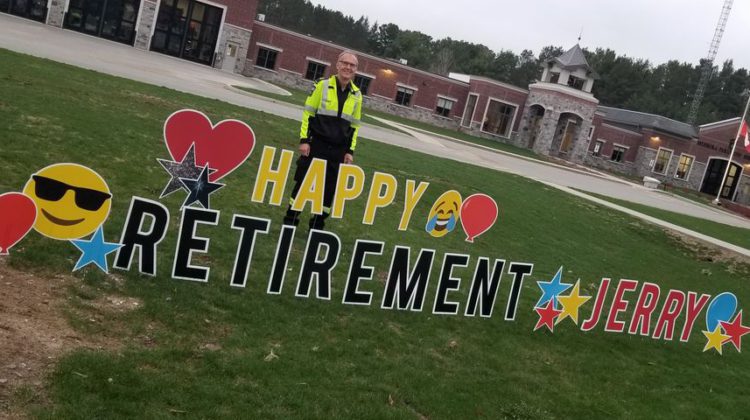 A sign was put out front of the Muskoka Paramedic Services' building on Taylor Road to celebrate Jerry Barnes last day (Photo supplied by: Shannon Aubrey)

“It has been a great honour to serve this community,” he tells the MyMuskokaNow.com newsroom. “I hope that I can retire knowing that I have made a positive difference in the community and have done some things that have improved patient care.”

Considering Barnes has spent five decades on the job, you would assume being a paramedic is what he always dreamed of being, but that’s not the case. He started with MPS when he was 19 and the plan was to use the job as a stepping stone to becoming an RCMP officer. “It was where I thought I should go and wanted to go,” he says of his dream of working with the RCMP. “But once I started doing this it became evident to me that this was the right fit for me.”

In his five decades working with MPS, Barnes says he has gone through and seen a lot of changes. Many will recognize the dual-purpose fire hall and paramedic dispatch building that is on Taylor Road, but when Barnes started he didn’t work out of as grand of a building. He says the building in Bracebridge he worked out of was a house with a garage that was across the road from where the current base is. In Gravenhurst, the base was a “very very old” fire hall that had been abandoned and was “nearly 100 years old.”

Stuart McKinnon is MPS’ Deputy Chief and has worked with Barnes for 14 years. It was during his first week on the job that he bumped into Barnes. “The really great thing about Jerry is no matter how long you’ve been here – or how long he’s been here – he’s just like one of the other guys or girls in the gang,” McKinnon says.

At only 20 years old Barnes was called in to help deliver a baby for the first time. “Initially it was scary, but it happened so quickly,” he says. “It was just exhilarating to have this life in your hands.” He adds that there have been too many moments over his five decades as a paramedic to list off all his favourite memories, but says it’s the positive ones that will always stay with him like delivering a baby, his first resuscitation and the first time responding to a major car accident where everyone survived.  “Those are highlights you never forget,” he says.

He mentions one story that happened just south of Gravenhurst. There had been a very serious accident that left a trucker stuck in the cab of the vehicle. “The trucker was trapped in the vehicle and the vehicle was on fire,” Barnes adds. They were able to quickly extinguish the fire, but it took another six hours before first responders were able to get the driver out. Thankfully, Barnes says the story has a happy ending with the driver going on to make a full recovery.

“The most impactful thing Jerry brought to the team was his positive attitude,” McKinnon says. “Even after the worst day or the worst call he still comes in with a smile and is there to support his peers.”

Over the years, you would expect that there have been many changes to MPS. On top of changing buildings multiple times and going through many different ambulances, Barnes says they’ve evolved from “first aiders on wheels” to “true paramedics” that are putting the skills they learned in school to good use. It’s not just about getting people to the hospital anymore, he says, it’s about caring for your patients as well.

“I think it would be fair to say that every single paramedic that’s come through Muskoka has learned more than one thing from Jerry over the years,” McKinnon says. While paramedics are well-equipped for the job once they leave school, he adds that having someone with a wealth of experience and knowledge of the area like Barnes is vital to helping ease newer medics into the job.

Now that he’s retired, Barnes plans to spend time on the small farm he owns with his wife. While he isn’t able to see them now because of the COVID-19 pandemic, the father of five is looking forward to the day when he can visit his two grandchildren in Fort Erie, Ontario.