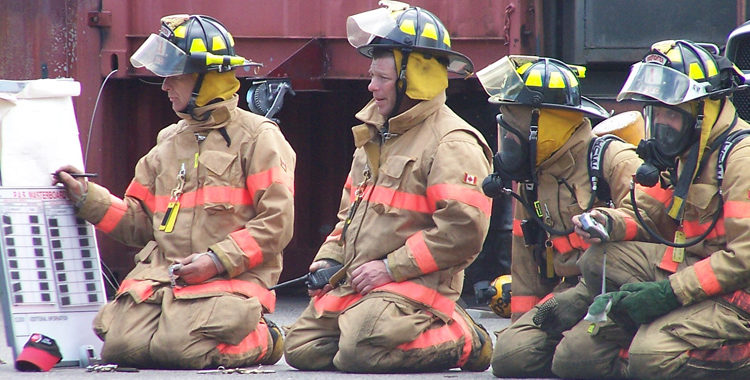 Firefighters being trained at the Ontario Fire College in Gravenhurst (Photo credit: www.ofc.cerps.ca)

Wednesday, March 31st is the day the province announced the Ontario Fire College in Gravenhurst will be decommissioned.

“We’re losing Ontario focused consistent training, particularly at the officer level,” Interim Fire Chief for the Gravenhurst Fire Department Brad Bigrigg tells the MyMuskokaNow.com newsroom. He says hands-on training can be handled locally for “core skills” but the College acted like a “finishing school” for junior and senior officers as they work towards higher positions like Fire Chief.

Bigrigg says it’s “disappointing” to be losing that.

The provincial government said in January that the plan is to open 20 regional training centres across Ontario while “strengthening” fire safety training with on-site and online courses available in the communities where firefighters service. Two mobile units will also be created to offer “live fire training.” Officials say that will include specialized equipment which will be used at the regional training centres.

“As part of our plan to modernize fire training in Ontario, the Office of the Fire Marshal will deliver fire safety training through a combination of in-person training at regional training centres, online courses, the introduction of mobile live fire training, and through learning contracts with individual fire departments,” explained  Press Secretary & Senior Communications Strategist Stephen Warner for Solicitor General Sylvia Jones in an email to the MyMuskokaNow.com newsroom. “Ontario’s fire services are unique and their composition differs across the province. To better serve the varied and evolving needs of fire services across the province, the OFM has developed a regional training model to expand access and provide local training to ensure that firefighters can count on the support and resources they need to keep Ontarians safe.”

Warner said there is a potential for more regional centres to be established, adding that this information has been sent to all of Ontario’s Fire Chiefs.

Since the announcement, Bigrigg says he hasn’t heard many more details on how the plan will be rolled out. He wonders why this is being done for fire services, but something similar isn’t being put in place for the Ontario Police College. While the fire college was closed in March 2020 because of the pandemic, the police college was reopened to in-class learning in January.

According to the Ontario Association of Fire Chiefs, 114 people died in fires in 2020, which is nearly double the toll from 2019. The worst year on record for fire fatalities in the province was 2001 when 119 people died. “There’s been absolutely no leadership in public education messaging for fire safety since the pandemic started,” Bigrigg says, adding that the numbers are “tragic” and as a Fire Chief it’s “brutal” to see them so high.

“The house fires, car fires and extrication that we do, it’s been pushed down to the lower level and there’s no coming back from that,” he says. Particularly, up-and-coming officers had the opportunity at the College to focus on the “major events” that they respond to. “I think we’ve lost the Ontario focus,” Bigrigg says. “I’m sure it’s gone for good.”

“In fairness to the government, maybe (the training) will be better, but I haven’t seen anything that will make it look better,” he says.

Bigrigg says he’s unsure about what will happen if this new plan fails. “How will fire training be handled then,” he wonders. The fire college helped train people in positions like frontline supervisor to take on higher positions like Fire Chief. “They were getting all the skills required not just to run a fire emergency, but also to manage and direct a fire department,” he says, listing off skills like incident command, report writing, developing operations and budgets, capital forecasting, master fire planning, and community risk assessment. “You were learning with your peers and in many cases, the classes were being led by expert instructors,” he adds. Bigrigg says he’s not sure that will be possible with this new set-up.

Mayor of Gravenhurst Paul Kelly has spoken to the MyMuskokaNow.com newsroom multiple times since the decommissioning was announced.  He has said he wants to be kept in the loop on whatever happens with the property. In response to questions from the newsroom, Kelly says he hasn’t gotten any new details on what will be happening to the property from the Solicitor General Sylvia Jones’ office.

“Infrastructure Ontario manages the Ontario government’s real estate assets and would determine any next steps for the property once decommissioning is complete,” Press Secretary & Senior Communications Strategist Stephen Warner for Jones said in an email.

In February, Gravenhurst council passed a motion aimed at saving the college, becoming one of many other municipalities that have passed similar motions.

Bigrigg says after working with the Ontario Fire Marshal’s office for 13 years, it’s unlikely this decision will be reserved. “My experience is, once they make their mind up, their mind is made up,” he says. “It’s a done deal.”

“I have no doubt that they will continue to push out large numbers of people being trained,” Bigrigg says, adding his main issue is that it doesn’t look like the training will be as good as it was at the fire college. “If the Minister is happy with that, that’s on her,” he says.