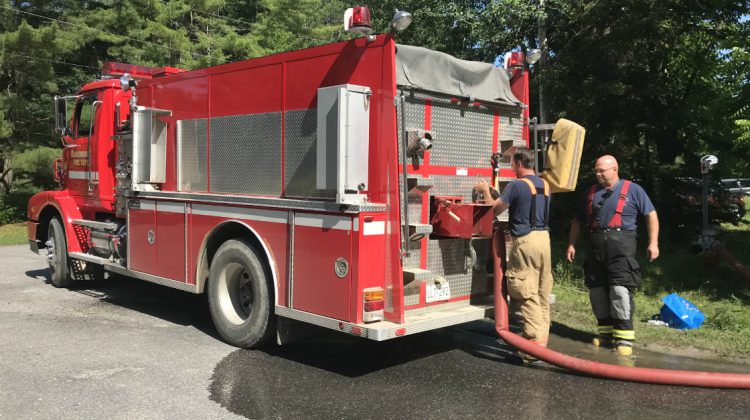 The provincial government announced last week that $5 million will be split between the 441 fire departments in Ontario.

Fire Chief for Muskoka Lakes Fire Department Ryan Murrell notes that $4,500 is guaranteed, but more money could be added based on your population.

“Trying to do inspections during COVID has been challenging,” explains Fire Chief for the Bracebridge Fire Department Murray Medley. He says they’ve tried to be “resourceful” to get inspections done without putting anyone’s safety at risk. According to Medley, the plan is to use the funding to purchase new equipment that would allow property owners to take a video of their property instead of having firefighters go through it.

As for training, he says they’re looking at options that allow for remote training to be done.

“(The province has) left it fairly open for us to start looking at different options,” Medley says, adding they are eligible for up to $8,500.

The Fire Chief for Huntsville/Lake of Bays Fire Department Rob Collins says they will also be applying. He says that the COVID-19 pandemic has put a lot of restrictions in place that have made life difficult for firefighters both on the training side and on the fire prevention/public education side of things. “We’ve struggled with doing online training,” he tells the MyMuskokaNow.com newsroom “Fire training is not generally set up that way.”

Collins says they are also looking for technology that makes home inspections more efficient. “There is software that’s available that allows us to do that more effectively in a remote way to avoid contact,” he says.

He notes that the funding likely won’t cover all the costs associated with the project. If approved, Collins says Huntsville is eligible for up to $9,400.

While happy to be getting the funding, Murrell is frustrated that it’s tied to population. “I didn’t think the funding formula was well thought out,” he says, noting that he asked questions about it when Ontario’s fire departments were notified of the province’s plan. Murrell says that Muskoka Lakes’ population is 6,700, but that doesn’t account for seasonal residents. “If you take a look at the modernization of the (District of Muskoka) right now, there’s an argument to be made there are far more ratepayers in markets in some of these seasonal communities,” he says, pointing to Muskoka Lakes, Lake of Bays and Georgian Bay as examples of places in Muskoka with a high amount of seasonal residents.

“The number of structures here remains the same, although maybe the parties in those structures only occupy them a portion of the time,” Murrell says, adding that he believes they would have gotten more money if the funding model took into account seasonal residents.

Despite his concerns with the model, Murrell says their plan is to purchase iPads to help with both training and inspections. “Some fire departments are looking at web-based models,” he says on training, adding they’re going to go that route as well. Murrell says they will be “enhancing documentation” to help with the inspections they’re doing, which will also involve the use of iPads. “Including documenting what we encounter when we go out for our smoke alarm program,” he says.

The MyMuskokaNow.com newsroom reached out to the Gravenhurst Fire Department for comment on their plans, but they did not respond by the time this article was posted.

Medley says the deadline to submit a proposal is March 19th. “The timelines were very short,” he says, noting they got word about the funding on March 11th.

With files from Alain Quevillon