The Minister of Labour raising awareness about human trafficking 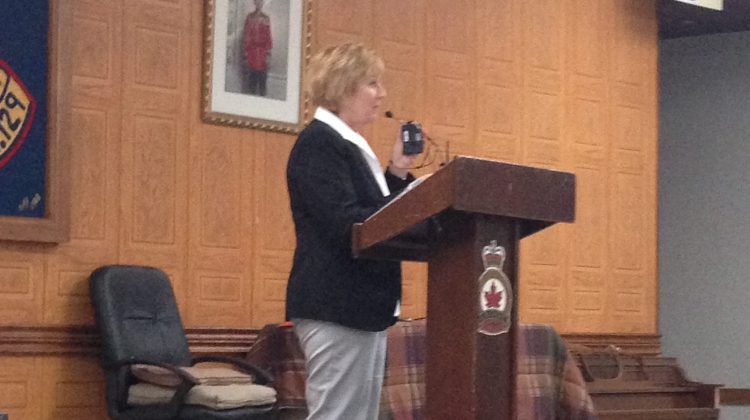 Ontario’s Minister of Labour, Laurie Scott, is sparking conversations about human trafficking both internationally and locally.

Scott took the stage at Centennial College as part of the Toronto Human Trafficking Awareness Conference earlier today. The Haliburton-Kawartha Lakes-Brock MPP started her speech by touching on the severity of human trafficking and how it is not just an international concern.

According to Minister Scott, two-thirds of human trafficking in Canada happens in Ontario.

“It could be happening in your community, online, or to someone you might know,” says Scott who goes to explain that they are not talking about human smuggling, which is the act of illegally bringing a person into another country.

Scott explains “human trafficking is the buying and selling of people as commodities.” adding “more than 90 per cent are born right here in Canada.

During her speech the minister made a point of thanking the students in the crowd, suggesting that it is good that young people want to learn about this subject regardless of the uncomfortable nature of learning about it.

She also took time to thank members of the Los Angelas Police Department who were there because “California has consistently accounted for the highest number of calls for human trafficking.”

Scott used her time on stage to emphasize that traffickers will use a variety of means to get people involved and adds that in some cases the victim is unaware of what is happening.

She says that both the province and the country are working towards creating safer places for victims to live while they are accessing services.

According to Scott, the government has created teams to gather intelligence and information on human trafficking around the province and inform the local police.