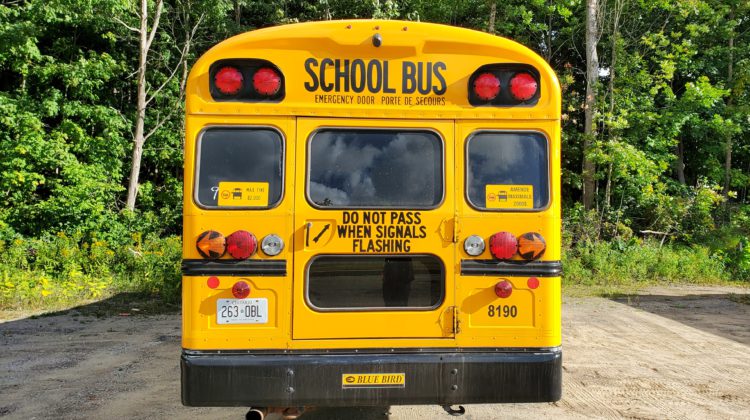 As the weather gets colder, students at Parry Sound-Muskoka’s Catholic schools are still dealing with bus delays of up to six hours per day.

“A couple of days this week, it’s been delayed both ways two or three hours. I don’t think anybody is actually waiting for it [anymore],” says Amanda Mahon, a local mother. “I have to miss time at work in the morning to get my daughter to school on time, or I have to leave work early in the evening to go pick her up so she’s not hanging around the school until six or seven o’clock.”

Although Mahon is a mother of five, she says she only has to make the 40 minute round trip to pick up and drop off one of her children. Her daughter attends St. Dominic Catholic Secondary School, one of the four Simcoe Muskoka Catholic District School Board (SMCDSB) schools in the region, along with Monsignor Michael O’Leary, St. Mary’s, and St. Peter the Apostle.

Until this school year, her daughter shared bus routes with her other four children, who attend public school. After bus service for the Catholic schools was switched to a new company, Wheelchair Accessible Transit (WAT), Mahon says it’s been nothing but inconsistency, delays, and missed pickups.

“Ever since the second day of school, it’s been a nightmare,” says Mahon.

Although bus routes have been changed multiple times to try to address delays, Mahon says a lack of communication with parents has only made things worse. She relates an incident one morning where the route was changed to an earlier time, but parents were not notified.

“We sat at the community centre with 10 other kids waiting for [the bus] to show up, called the bus line after a half hour of waiting, and they couldn’t track down the driver, didn’t know where she was,” says Mahon. “So I ended up being two hours late for work that day.”

When the bus does show up on time, Mahon says her daughter is on the bus for one and a half hours, despite being only 20 minutes outside of town. Her other children are on the bus for about 30 minutes. She says she wishes bus service would go back to sharing routes.

“The kids need to be in school on time. You can’t just throw a little kid into before and after school daycare when the bus is going to be late, so there’s the little kids that are at the school waiting for three hours after school,” says Mahon. “Like, are you kidding me? What are they supposed to do in winter? The public school buses were 100 per cent reliable, so they need to be switching back. This can’t go on for the school year, this is absolutely ridiculous.”

Mahon says her daughter has not received any flak for being late, and that the schools stay open as long as possible for the kids who are stuck waiting.

Officials with WAT declined an interview, and the Simcoe County Student Transportation Consortium, which coordinates transportation for the Catholic board, did not respond in time for publication.

According to Pauline Stevenson with the SMCDSB, a delegation of parents will present on the bus issues at the board meeting on October 20th at 6:30 p.m..