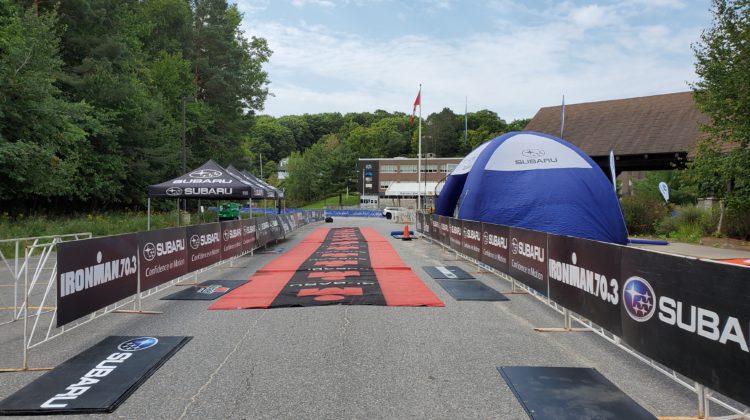 Huntsville has postponed the renewal of an expired three-year contract to host its annual Ironman triathlon.

Orange-clad town councillors voted unanimously at the September General Committee meeting Wednesday to postpone the renewal until after further negotiations with Trisport Events, the company that organizes the race. It is the second time the renewal has been postponed; February’s General Committee featured a similar vote to postpone until after the event took place in August.

The main subject of discussion was the full closure of Brunel Rd. from Veterans Way to North Mary Lake Road.

“I think it’s critical that we carry on with this contract, however with one proviso, and that would be that we never ever again allow for a full road closure for this event or any other event of this kind,” said Councillor Brian Thompson. “The full road closure just caused [so many] problems this past year.”

Those problems included 314 properties having no road access for the duration of the closure, which lasted longer than the scheduled four hours, according to a report from town staff. Thompson added that the closure was only needed because of the Diggin’ Downtown construction on Main Street, which would be completed by the next time the race is held.

Councillor Tim Withey agreed with Thompson, adding that he’d like to see the date of the race moved as well to not crowd the town during the already busy summer months. Withey later added that it felt like the town was being “strong-armed” into agreeing to certain conditions.

Huntsville Manager of Sales and Customer Service Greg Pilling told committee that the extension of the four hours was an OPP decision made for safety during the heavy rain on the day, later adding that 2021 was the first year the OPP has had no safety incidents during the race. Repeating 2021’s route would require a full closure, Pilling said, but switching to one of the three routes used in previous years would not.

Pilling added that moving the date was likely not an option, as it would conflict with Ironman races in other locations.

“I support Trisport, I support the athletes,” said Councillor Dan Armour. “But I don’t support them coming into our town and taking it over, and I think we need to respect the constituents who live in that area and what happens to those people.”

Mayor Karin Terziano said she would be willing to “bend to” keeping the race in the summer, but would never again support a full road closure.