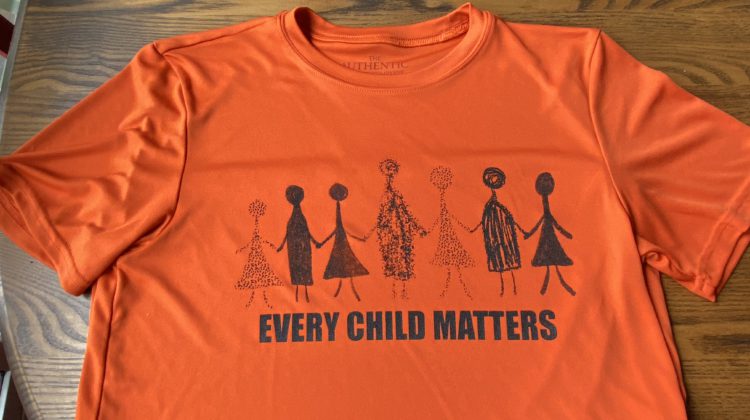 As people across the country recognize the first annual Day of Truth and Reconciliation this week, an Indigenous Activist and Huntsville resident says it’s a good place to start.

“I think that’s a good start, but it takes more than just wearing an orange shirt and remembering on one day,” says Joyce Crone, a Mohawk woman and retired educator who co-organized a memorial to residential school children in River Mill Park. “We have to go much further than that.”

Crone will be one of the speakers at the Town of Huntsville’s Orange Shirt Day March and Gathering on September 30th. The march starts at the High Street Municipal parking lot at 1p.m., ending at River Mill Park, where a ceremony will take place. It will feature several speeches, as well as a traditional Indigenous drum performance.

Crone says her speech will call on both Indigenous and non-Indigenous people to let go of biases, take action, and practice mutual respect and recognition.

“[I’ll ask] the people of Huntsville and the community beyond to pledge to move in a different direction, because with Truth and Reconciliation, we can’t be doing the same things that we have been doing for over 100 years and just forgetting about it,” says Crone.

The march and ceremony are not the only things the town is doing to recognize Truth and Reconciliation. Every day from September 27th to October 1st, the Huntsville Public Library is adding a new piece of exclusive programming, created by the National Centre for Truth and Reconciliation, to its website as permanent fixtures. Additionally, Muskoka Heritage Place is unveiling a new panel for its Indigenous Exhibit, and Huntsville’s municipal buildings will lower their flags to half mast on the 30th.

“I’m very proud to be able to say I live in Huntsville,” says Crone. “I know there are many communities that are just recognizing the one day on the 30th.”

To that end, the Town of Bracebridge is lowering flags at its municipal office to half mast on the day. The Town of Gravenhurst will commemorate the day by raising an orange flag.

Muskoka’s District Chair John Klinck says he’s happy to see municipalities taking the matter to heart and says it’s been one of his, and the District’s, priorities over the past few years.

“We’re going to focus on seeing what transpires this year, then work with the Muskoka and Area Indigenous Leadership Table to develop a way of appropriately recognizing this day and hopefully focus it on education, awareness, and more importantly, action,” says Klinck. “How can we include the recommendations of the Truth and Reconciliation report in actions going forward.”

Klinck says the District does not currently plan to make September 30th a municipal holiday, but that could change if the idea picks up enough momentum.

According to Crone, it’s important to keep efforts going beyond the day.

“I believe we’re in the ‘truth’ portion: I also believe that we’re stuck in a freeze frame of not knowing what to do next,” says Crone. “I believe that until every child is found and is taken home and has a proper burial with their families, that we can’t move on to reconciliation.”