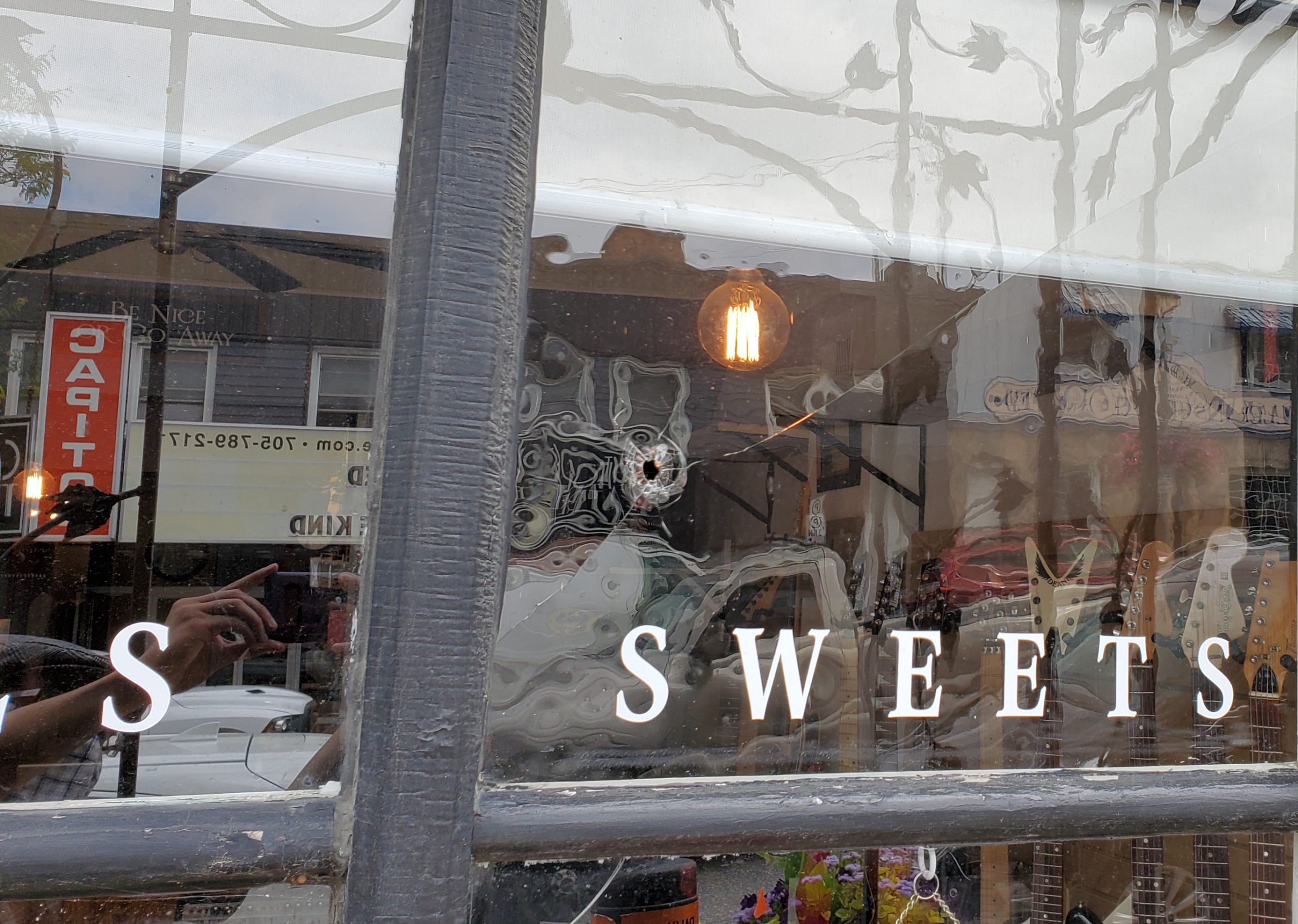 Less than a week after opening its doors, a Huntsville business was met with a shattering surprise.

Music on Main owner Mike McAvan walked into his business Tuesday morning to find a quarter-sized hole in his storefront. An unknown vandal had shot a pellet through the antique front window with what McAvan thinks was a high-powered BB gun. He says he’s frustrated by the incident, but is just glad that no one was hurt.

“The fact that something like that went off in public on Main Street, where people walk, people sit, it could have been one of my family members sitting in the window seat, could have been hit,” says McAvan. “Just from the damage it did, that would have lodged itself right in someone’s skull, so I’m not impressed about that at all. It’s a little bit worrisome that someone is being allowed to run around with a pellet gun that could potentially hurt somebody.”

McAvan’s business, a combination of music store and cafe, sits in a historic commercial property at 7 Main Street. According to McAvan, the front windows have been there since the building was built in the late 1800s.

“It was priceless, literally priceless.”

According to McAvan, after posting about the damage on Facebook, several people came to him about other incidents, such as a contractor’s truck window being shot out, several businesses being pelted with eggs, and a woman being harassed by a group of youths wielding a high-powered BB gun. He says he thinks he knows who the culprits are, and has since taken down the original Facebook post because he did not want to start a witch hunt.

“I know from being a kid myself at one point, and being a dad, that kids do stupid [stuff],” he says. “Not all kids do this kind of thing, there’s some great kids in the neighbourhood who come hang out here that are just appalled that this happened.”

McAvan says he hopes the perpetrators will take responsibility, but that it’s unlikely to happen.

“The parents of the kids who may have done this should come forward and pay for the damages, and do right,” says McAvan. “I mean, that’s pie-in-the-sky mentality, cause no one’s going to fess up to that, no one’s going to fork over that kind of money.”

With antique glass restoration costing in the thousands of dollars, McAvan says he plans to simply replace the damaged pane and move on, something that might in itself cost more than $600.

Huntsville OPP’s Jeff Handsor says the incident is being investigated, and asks anyone with information to come forward.