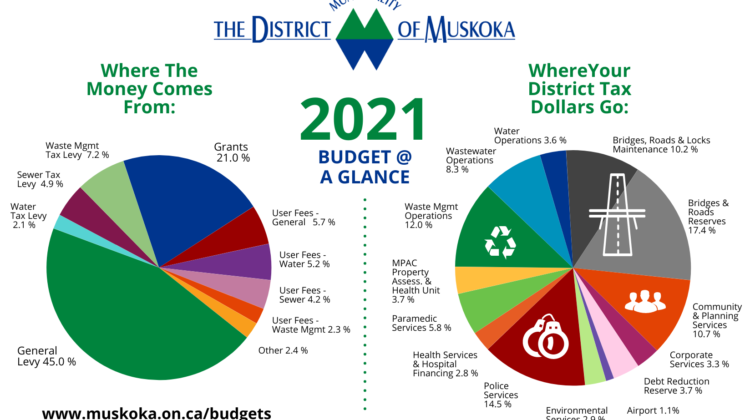 Photo supplied by: District of Muskoka

The District of Muskoka council approved the 2021 budget and with it comes a 2.05-percent tax increase.

Chief Administrative Officer for the District Julie Stevens explains that comes out to an increase of $17.57 a year for a property valued at $300,000.

“For a long time now, asset management planning has been a key priority for the District,” she explains to the MyMuskokaNow.com newsroom. Stevens says $1.4 billion in assets are accounted for in the budget. A total of $29 million has been earmarked for construction projects over the next 12 months to ensure those assets are kept in good shape.

On the operating side, Stevens says the $1 million allocated to Muskoka’s Community Paramedicine for Long-Term Care program will be covered by the provincial government. A grant has also been awarded to the Muskoka Steamships and Discovery Centre who will use it to help develop one of the three new exhibits they’re working on as part of the centre’s expansion. Stevens explains the grant will be used for the “Misko-Aki: Confluence of Culture” exhibit that will dive into the local Indigenous people’s life between 1830 and 1930 in Muskoka.

She says that $29 million has been budgeted for capital projects, with $20.5 put aside for road maintenance. Stevens adds that the money also goes towards annual winter maintenance.

The largest part of the budget will be contributions to the District’s reserve funds. Of the $81 million tax levy, $31 million is being put away for safekeeping. “That’s putting money away so we can invest into our capital over a period of time,” Stevens explains. She says it allows them to have funding available to replace or repair assets when needed.

The District reserves were a hot button topic during the District’s budget meeting. Bracebridge’s Deputy Mayor Rick Maloney and Councillor Don Smith pitched the idea of taking approximately $1.6 million from the reserve fund to offset the tax raise. That motion was defeated by council.

“It would be a really significant increase next year,” Stevens explains. She said during the final budget meeting that using funds from the reserve funds to offset the tax hike could cause the 2022 budget to include a 4.26-percent increase to Muskoka residents’ taxes. “It’s based on some assumptions that we’re making on next year,” she explains, noting that they haven’t even thought about starting work on the 2022 budget yet.

Next year, Stevens says they would have to account for any inflationary costs while also paying the reserve back, which would account for the larger-than-usual jump. “The most insignificant part of that 4.26-percent was that 2.46-percent is related to just the fact that the reserve would have to be paid back over time,” Stevens explains, pointing out that they would not be able to borrow the same amount from the reserves next year.

The District of Muskoka’s $131.6 million 2021 budget has been posted on its website.