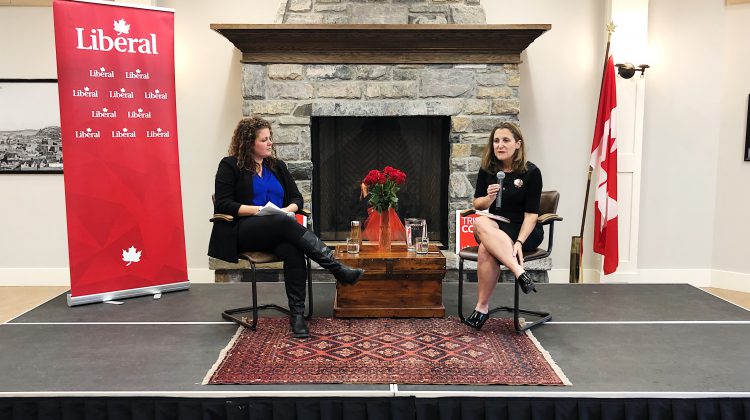 University—Rosedale Liberal candidate Chrystia Freeland came to Huntsville to hold a “fireside chat” with Cowie at the community’s Active Living Centre, located at the back of the Summit Centre. The event took place in the early afternoon, and drew a small group of attendees.

The people in attendance were divided between mainly older retirees and students from the nearby high school, who had to leave the chat early to catch their buses home.

The event itself consisted of a discussion between Cowie and Freeland on the various aspects of the Liberal platform, as well as some stories from Freeland about her past work as foreign minister.

What was notable, however, was the message Freeland was bringing to the people in attendance.

According to the high-profile candidate, Parry Sound-Muskoka is considered winnable for the Liberals in this election, and it’s believed to be one of a few that could decide the ultimate outcome of the race.

That value to the Liberal effort was why Freeland was sent north to hold the event in the first place, according to the discussion between the candidates.

After that chat, Freeland re-iterated to reporters that the riding is considered winnable based on what was being heard during door-knocking.

Cowie echoed her colleague, voicing an opinion that only the Conservatives or Liberals could win and only the Liberals would keep making progress on key issues in the riding.

Freeland believed Cowie would be a great voice to have when it came to climate-change efforts, as a possible MP from a rural riding. She believed Cowie could help alleviate the “urban-rural divide” on those efforts.

Asked about her own expectations for the election outcome, given her views about a possibly tight race, Freeland chose to focus on the possibility of a Liberal majority.

As for what Cowie might do in a Liberal administration if elected, Freeland didn’t want to speculate.

“That’s a decision for the Prime Minister,” said Freeland.

“Truly, the only person who will know what his job is on election night or the next day is the Prime Minister. It is then 100 per cent up to him to decide about everyone else. And that is 100 per cent the right thing. Our jobs are to be focused on this election.”

The four other confirmed candidates in the riding are Scott Aitchison for the Conservatives, Tom Young for the NDP, Gord Miller for the Greens, and Daniel Predie Jr as an independent.