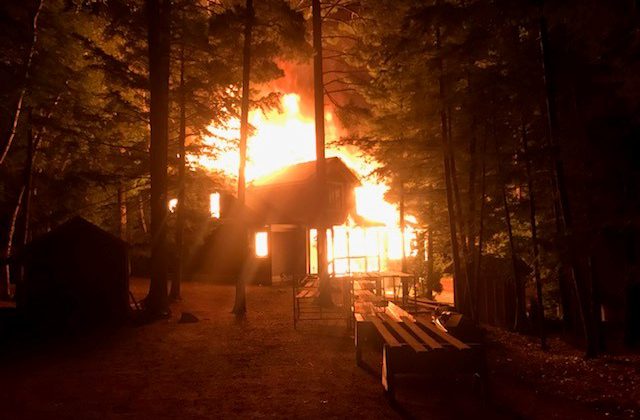 An image of the fire, courtesy of Muskoka Lakes fire department.

MUSKOKA LAKES, ON- A fire on Friday evening has proven costly for a structure on Tribble Road.

According to the Township of Muskoka Lakes, the local fire department responded to a structure fire along Tribble Road with firefighters from the Raymond and Windermere stations arriving first.

The building was engulfed in flames on arrival, and crews worked quickly to control the fire, with assistance from the Huntsville fire department.

The occupants of the building were out when crews arrived, with no injuries reported. The blaze is believed to have started in the chimney, with the damage estimated at around $1 million.

“As temperatures begin to decrease and fireplaces are used as a source of heat, we are reminding residents to inspect and clean their chimney before burning,” said Doug Holland, Fire Prevention Officer for Muskoka Lakes.

“Please check your chimney to make sure it is clear of any obstructions, burn properly dried, well-seasoned wood, allow ashes to cool before removing, place ashes in a non-combustible container, and install working carbon monoxide alarms outside all sleeping areas.”

No other structures were reported damaged from the incident.