Bracebridge park will have life-saving equipment 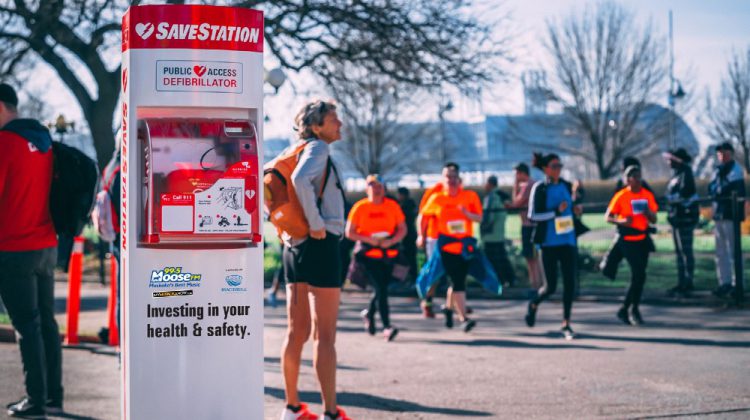 A new AED station will be installed at Kelvin Grove Park in Bracebridge in June. (Action First Aid Photo)

BRACEBRIDGE, ON – A new piece of life-saving equipment is being installed at Bracebridge’s Kelvin Grove Park.

It is called SaveStation. The Town of Bracebridge and Moose 99.5 FM are sponsoring its installation. The approximately six-foot-tall cabinet holds an Automated External Defibrillator (AED) that can be used in the event of someone who is unconscious and not breathing normally, suffering cardiac arrest.

AED units are commonly found in arenas, schools and municipal buildings, but few are out in the open as the unit provided by Action First Aid.

Carly Jackson, an AED Specialist with SaveStation, said the concept is to make AEDs more accessible.

“We had started thinking about getting AEDs accessible, 24-7, year round, which means putting them outdoors,” she said.

A large percentage of cardiac arrests happen when most buildings are closed and access to an AED is limited.

“Years ago municipalities began putting AEDs indoors in their buildings, but unfortunately 60 per cent of cardiac arrests actually happen after about 5:00pm when the buildings will be closed and then people don’t have access to them,” Jackson said.

She says having one in such a public space will be both functional and educational.

“The concept of SaveStation was to create a lot more education and awareness,” she said.

“Instead of walking past that white AED cabinet at the arena, now the AED cabinets are highly visible for anyone in the public.”

Jackson would like to see SaveStations in more public areas because ultimately she believes they will save lives.

“So really getting these everywhere, no matter where something is happening, you could run and grab that within a few minutes and get back to the person. That is going to give everyone the best chance for survival,” she explained.

The outdoor cabinets are monitored electronically, so when it is accessed a photo is taken of the person removing the unit, and texts can be sent to local responders.

While they can be expensive, Jackson contends there is little resale value as all items are tracked with a serial number. She also said that theft isn’t a common occurrence, given that people respect AED’s being in their community, and no risk of harm or wrongdoing as the devices will only provide shocks if someone’s heart actually needed one.

“We’ve had defibrillators publicly accessible indoors for over ten years here in Canada and very minimal (theft) has occurred,” she said.