A group of Bracebridge residents is opposing the development of land near their waterfront homes.

Muskoka Royale Development Inc. has purchased a parcel of land and is proposing the construction of a number of school and residence buildings. The property is bordered by Ecclestone Road on one side and Stephens Bay Road on the other.

Local homeowners are objecting to the proposed elementary and high school complex that would include live-in boarding for up to 1700 students attending a Chinese-Canadian private school. 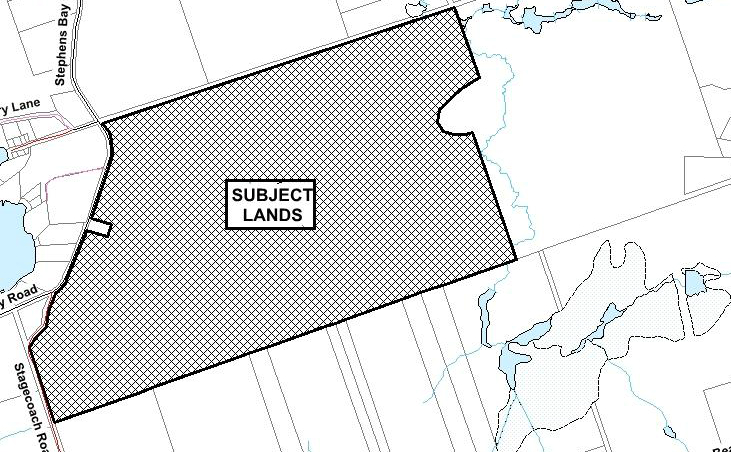 The Stephens Bay Road Association is led by Michael Hart, a resident on the waterfront near the proposed development.

He lists a number of reasons his association is in opposition including wildlife concerns on the land, a portion of which is deemed to be on wetlands. But he also does not shy away from the argument that culturally there may be issues as the school will be for Chinese speaking students who are coming to Canada to be educated and housed.

“(It’s) Asian money coming in, so wealthy developers from Asia coming to set up a private school in Muskoka,” explains Hart.  “Go build it somewhere else. Why would we want it here? We can’t imagine the infrastructure requirements for 1700 elementary and high school level students that come from halfway around the world.  You know, (they’re) not familiar with our culture, never mind our language. And they are going to be a tremendous drain on the town of Bracebridge core services.”

Hart feels the introduction of so many people in the area will compromise police, fire and emergency services.

Mayor Graydon Smith understands there may be opposition to the proposed development but he says people need to understand it is all a long process.

“I think people get the feeling like it’s the end and something’s going to happen without their ability to comment,” Smith says. “And it’s exactly the opposite. We’ve had a public meeting, had a lot of comment. We want more comment and we will take that all into consideration as we work through this. It’s a significant proposal and so significant proposals don’t just get passed on a whim.”

Hart says homeowners were given little notice about the first meeting, which was held by Muskoka Royale Development.

“They did some open house in January at the Independent Grocer,” he says. “I can’t imagine an open house to learn about a development and asking questions at a grocery store.”

A meeting hosted by the town was held last Wednesday at council chambers.

“Legislatively there is only a need for one public meeting for applications like this,” explains Smith. “Council may decide to have more if things warrant. If something substantively changes that we need to go back and get more comment on from the public, council will, I am sure, take that opportunity. But there is a lot of technical parts to this that planning staff need to work through with the applicant.”

Hart says a lot of the homeowners along Stephens Bay Road paid for that access and are worried they will not be able to enjoy their properties anymore with so many students in close proximity.

“It’s right in the Bay where all of us decided to retire and build places and spend a lot of money,” he offers. “What happens when all these kids come over 500 kids at a time come to the park? To go swimming, canoeing, yelling and screaming in the Bay. That’s not exactly why we’re waterfront property owners.”

Smith says the proposed development seems to be a good use of land that has historically been difficult to work with.

“I can tell you that the existing owner has found a use that is a good use and can be accommodated on the site.  They have done extensive environmental work with local environmental engineers that know the site really well to minimize any environmental impacts and actually enhance the amount of protected area that’s currently on that property,” he says.

Hart says while they are fighting this on a political front they are prepared to make a legal argument as well.

“I am meeting with the Muskoka Lakes Association Wednesday night and Thursday  I am meeting with the Friends of Muskoka,” explains Hart. “Both have deep pockets, very familiar with fighting large developments in Muskoka. And I have some neighbours that are prepared to put up some ante to hire some professional legal help to help us in this process.”

The development is sure to be a hot topic at the Bracebridge Council meeting tomorrow night.

MPS cutting down on offload delays at hospitals

MPS cutting down on offload delays at hospitals