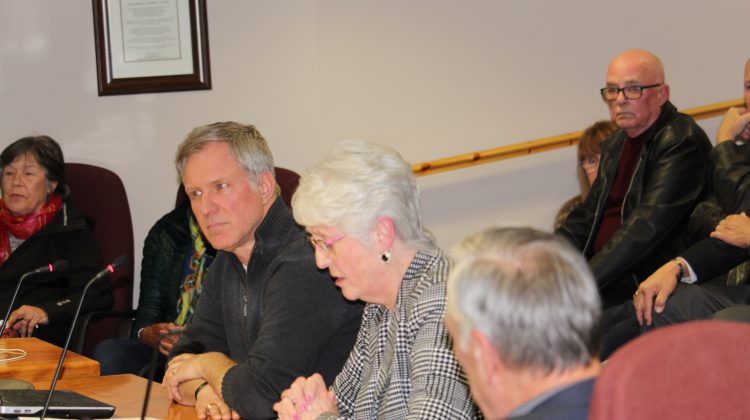 The vote to petition the province to dissolve Muskoka Algonquin Healthcare is going to have to wait. Huntsville council voted Monday to table the motion to send a letter to the Ministry of Health and Long-Term Care to dismiss the board and CEO of MAHC.

MAHC Board Chair Evelyn Brown and Chair of the Capital Plan Development Task Force Cameron Renwick spoke to the town at the meeting about the growing frustration in the community over hospital redevelopment talks. MAHC is evaluating three options for the future of the hospitals in Huntsville and Bracebridge. The first is having two acute care sites, similar to how it operates now, which would cost around $475 million through a combination of new build and renovation. The second option is designating inpatient and outpatient services at each hospital location, which would cost around $373 million through new build and renovations. The third, and most unpopular, option is a single-site hospital model which would cost around $348 million according to MAHC.

Brown says one of the biggest misconceptions in the community is the decision has already been made to move to a single-site model, which is not true. She says it’s not the case that one model has been chosen, and in fact the task force has put more focus on the options for two sites. During the presentation, Brown said she understands the town wanting to protect an institution of importance, but the manner in the way the town is making its case is disappointing. She says hard-working people have been unfairly criticised using misinformation and defamatory comments. She said if the motion to dissolve MAHC convinces the province to step in, a supervisor would be appointed which would take the decision making power out of the community’s hands.

Renwick also gave an update on some changes to the different options the task force has made, following public feedback. He explained a public survey found access to an emergency department was critically important, and so the task force modified both two-site models to include emergency rooms at both sites 24/7. He also explained when feedback called for acute care services at both sites, the two acute-care site model was modified to include emergency, obstetrics, critical care and surgery at both sites. All of that goes to show, according to Renwick, that the task force is listening to the community.

Renwick says just because the one-site model is still an option on the table doesn’t mean it’s automatically going to be chosen. He says the programs and services at each of the two-site models have just been decided on by the task force, and it hasn’t been afforded the opportunity to fully share that with the community. When it comes to what’s next, Renwick says the task force will apply objective evaluation criteria to all three models, and then a recommendation will be made. He didn’t have an exact timeline, but estimated that will be within the next couple of months.

Brown also noted MAHC is willing to work with the town and have a meeting to talk about the questions and concerns.

When the time came to read the motion to send a letter to the province to dissolve MAHC, some concerns were raised around the table. Councillor Bob Stone said he has some reservations as there’s no evidence the board has a clandestine agenda. However, he said all of the closed door meetings have left everyone worried, including thousands of people on social media. He also noted that he worried removing the MAHC board and CEO would end in the province sending an advisor to make the decisions, and then the town is back to square one.

Brian Thompson was the only councillor to vote against tabling the motion until the next meeting, and so it was passed. That means council can pull the motion off of the table at April’s meeting. If it dies, a new motion can be brought to the following meeting.