Muskoka Trek for Tourette back in person this year 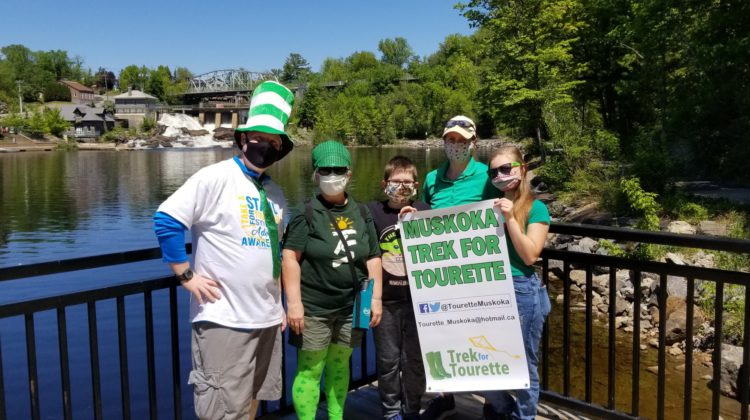 The Muskoka Trek for Tourette is back in person after running virtually for two years.

It runs on May 28 at Gravenhurst’s Gull Lake Rotary Park, raising awareness and funds for Tourette Canada.

“Our goal is to continue to build awareness, raise funds locally, and try to help build a more inclusive Canada where people with Tourette Syndrome are recognized for their contributions to society, and not be the butt of a joke,” says Shawn Forth with Tourette Canada’s Muskoka Resource Unit.

Tourette Syndrome is a neurological disorder characterized by sudden, involuntary sounds or movements known as tics. It is estimated to affect between one and four per cent of the Canadian population. Only about 10 per cent of people with the disorder also suffer from coprolalia, which is involuntary swearing.

According to Forth, a portion of the funds stay local, going towards the organization’s monthly meetings, educational resources for families and schools, and sending local members to attend a Tourette-support summer camp. The rest goes to the national organization to fund resources and awareness campaigns across the country.

“Often when they have a new diagnosis of Tourette Syndrome, most families are unsure what the next step is, most are panicked,” says Forth. “Having the support group human resources, as well as the publication resources, it helps empower families to advocate for their child, as well as helps the education system better program for the child.”

Forth was diagnosed with Tourette Syndrome at the age of 14. He says many kids growing up with Tourette’s face bullying for their tics, and while he was able to handle it, others might have a harder time.

“Luckily I had a really good family support structure in place, but for some people that may have created a lot of challenges and trauma,” says Forth. “Having the dialogue and having the knowledge that currently exists within society about what Tourette syndrome is, and more importantly what it isn’t, we have a lot of families growing up with knowledge that we just did not have when I was growing up.”

The Muskoka event is one of only four treks nation-wide running in-person this year. However, participants can choose to fundraise virtually instead on May 28 or 29. Forth says the upper goal for the fundraiser is $5,000.

To sign up for or donate to Muskoka Trek for Tourette, go to its event page.