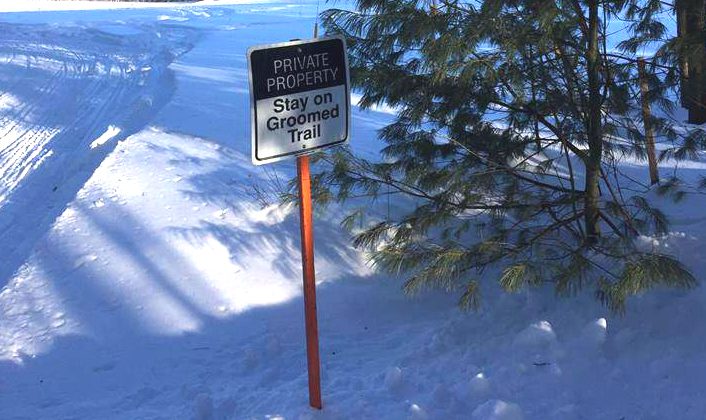 Two years after a private landowner revoked access to a critical section of trail in Port Carling, District of Muskoka council will vote on a potential solution.

Steve Elliot, Vice President of the Muskoka Lakes Snowtrails Association (MLSTA), is hoping council goes forward with the proposal that will see a 500-metre trail set up along Highway 118 between Carr Road and Penwood Road. When the district’s Engineering and Public Works Committee meets on Dec. 2, the report from Fred Jahn, the Commissioner of Engineering and Public Works, states they could also choose to do nothing.

“This option provides the least risk from a liability perspective,” Jahn writes in the report.

The responsibility of relocating the trail would then be put on the shoulders of the MLSTA.

If committee does go forward with setting up the trail along the highway, however, the report states it would be in place for two years to give MLSTA time to acquire property rights and figure out a permanent solution. Signage and guard rails would be installed and vegetation would have to be cleared, with the cost on MLSTA, according to Jahn.

Elliot explains in 2019 – and again in 2020 – a private landowner revoked access to his property essentially cutting off Port Carling from the trails coming from the Bracebridge to the east.

While MLSTA tried to work on a solution, they were held back by the fact that they were surrounded by moving water that doesn’t freeze in the colder months.

Elliot says having a snowmobile trail go along a section of road, or highway, is not exclusive to what is being proposed for Port Carling. He adds this is done in other parts of Muskoka.

Jahn writes in his report that he’s concerned about the liability that comes with the potential of a snowmobile trail going along a highway. This was also the case in February when district council rejected a similar proposal. Elliot says MLSTA, district staff, and engineering consulting firm CIMA+ worked on an alternate solution that would satisfy council’s requests to make the new trail safer, which is what will be debated Thursday.

Ahead of the meeting, Elliot is asking sledders to email [email protected] to show their support.