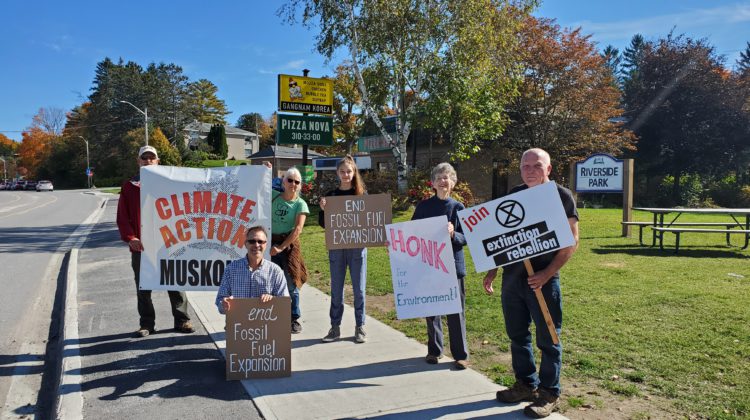 The weekly “climate strikes” are organized by Climate Action Muskoka (CAM), and take place every Friday from 11:30 a.m. to 12:30 p.m. at Huntsville’s Riverside Park and Bracebridge’s Memorial Park.

Oliver Klimek, a CAM volunteer and retired health research ethics officer at McMaster University, organizes the demonstration in Huntsville. He says the demonstrations were on hold for a while because of the COVID-19 pandemic but started back up in early September.

“We want people to see that there is an issue,” says Klimek. “To get people out onto the street to do this every week requires a lot of energy, and so if they see us there all the time, it will help bring home the message that there is a serious problem, and we want to do something about it.”

The local demonstrations are not directly affiliated with the international climate organization Fridays for Future, but “participate on the same day with the same message,” according to Klimek.

Signs at the demonstrations call on governments to enact measures such as setting specific carbon targets and ending fossil fuel expansion. They also encourage locals to take individual action, such as switching to electric vehicles, insulating their homes to be more energy efficient, and eating less meat, as well as petitioning municipal councils to implement climate action plans as soon as possible.

Klimek says that while CAM applauds municipalities, including the District of Muskoka, for pledging to reduce their emissions, the climate crisis will only be solved if everyone works together.

“We do seem to get quite a lot of support, so I think people are aware of the problem and they want something to be done, but there’s only so much that individuals can do themselves,” says Klimek. “What we really need is all the government levels to cooperate, set strong targets, and actually start making some changes.”

Klimek adds that CAM also plans to organize a large demonstration in Huntsville on November 6th, during the United Nations’ COP26 Summit on climate change in Scotland, with more details released soon. He encourages anyone interested in joining the efforts or learning more about climate change to visit Climate Action Muskoka’s website.

“If [people are] driving by, they can honk, give us a thumbs up to let us know they support the message,” says Klimek. “We would love additional strikers, so if people have an hour on Fridays, that would be terrific.”