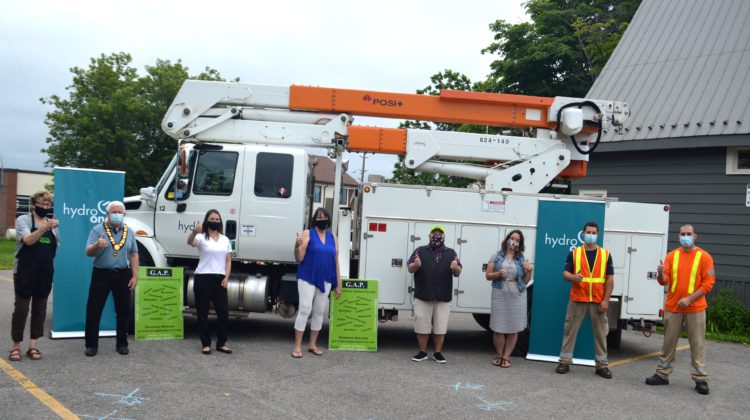 Representatives from Hydro One made a stop in Cottage Country to present Gravenhurst Against Poverty (GAP) with a $10,000 cheque to go towards its Young Adult Centre (YAC).

Currently, the project is at a standstill while they await word on if they can purchase the 8,000 square foot downtown ING building, which is right beside the Opera House on Muskoka Road. The building’s former owner passed away recently, so the team at GAP is working with a lawyer to figure out how ownership can be transferred so they can purchase it. “We are waiting patiently for that legal piece to happen,” Dart says.

She goes on to say that so long as they’re able to acquire the building, the money will go towards buying supplies for it like furniture.

There are other funding opportunities that GAP is looking at, but it’s unlikely they would be successful without having a physical building for the YAC. They have partnered with Raising the Roof for help applying for a “major grant” but Dart says “all the stars have to align” for them to get it. On top of that potential grant, GAP has been gathering pledges. They’ve raised over $300,000 so far out of their $500,000. Dart points out they are not taking any cash until they have a physical building. You can make a pledge by emailing [email protected] or by going to GAP’s website.

While they don’t officially have a building yet, Dart says that hasn’t stopped them from planning what will be in it. It will include 10 affordable housing units, two emergency housing units for youth in need and multi-purpose kitchen space that will be used by the youth and GAP volunteers. Dart says the main floor of the building will act as a community hub with GAP partnering with other agencies who will set up shop on the ground floor. “These multi-purpose community centres are becoming a good option in small, rural communities,” Dart says.

GAP put out its 2021 Impact Report, which paints a grim picture. During the COVID-19 pandemic, they have seen a 428-percent rise in the number of households they’re providing food to. This year, they’re delivering food to 635 households, compared to 145 in 2020. GAP has spent over $150,000 on food, gift and gas cards over the past 12 months as well.

Mayor Paul Kelly and some councillors and Hydro One spokesperson Jay Armitage were on hand for the announcement in front of the Trinity United Church, but it was the handful of GAP volunteers that were in the crowd that brought the biggest smile to Dart’s face. “They were downstairs preparing bags and boxes and filling them with fruits and vegetables, baked goods and bread,” she says, adding the care packages also include goodies from the Canadian Red Cross. “I can’t tell you how much it warmed my heart to look out there and see them all wearing their green GAP hats and t-shirts and some of them had their GAP aprons on,” she says. “It just looked so wonderful to see their smiling faces.”

Dart says it’s the volunteers that are the power that keeps GAP running. There are currently 153 active volunteers, with another 133 waiting in the wings. “It’s become a big operation,” Dart says. She adds that number includes the YAC volunteers who have been hosting sessions virtually with young people while they continue to work on the building project.

Whether it’s engaging with youth, cooking food on Thursdays, delivering it, or sitting in GAP’s office working on spreadsheets, Dart says they would not be where they are without the volunteers.