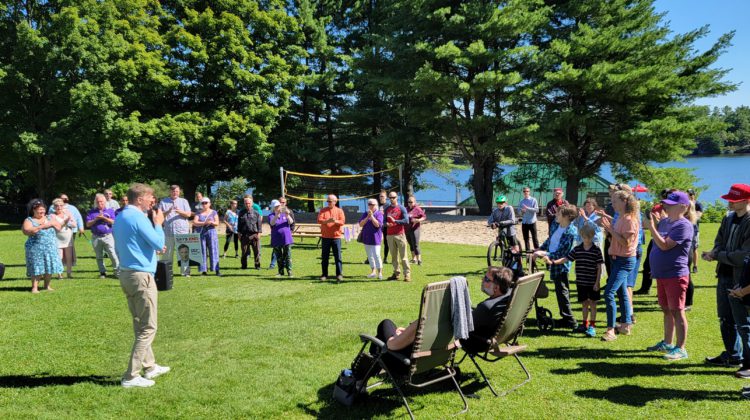 With a federal election expected as early as this fall the leader of the People’s Party of Canada (PPC) is already out spreading his party’s message.

After stops in Vancouver, Alberta, Saskatchewan and Manitoba, Maxime Bernier is bringing what he’s calling his “Mad Max Freedom Tour” to Cottage Country. He was in Huntsville and Port Carling on Sunday and made a stop in Gravenhurst Monday afternoon. He also held a campaign-style rally in North Bay over the weekend.

“We are the only national political party that is against these draconian lockdowns and stay-at-home orders and curfews,” Bernier said during the rally. “I understand right now this summer we have gained some of our freedoms but we know this fall it will come again and we need to end that.”

Bernier claims this is the first time in the “history of the world” that lockdowns are being used to fight a virus. “There are other ways to do that, the most important, like some other experts are saying, is we must protect the elders, we must protect the most vulnerable and maybe lock them down, but not the population, not the economy,” he went on to say.

Bernier’s message against lockdowns also ties into his party’s post-pandemic economic recovery plan. “The Trudeau government gave a great incentive to the provinces to do these lockdowns by financing their economic loss,” he said. “We will stop that, we will stop all these programs and we will reopen the economy. These lockdowns are an experiment and a failed experiment.”

Bernier added he is also fighting for “western civilization values” and is against Bill C-36 and censoring social media. “We must be able to say what we want to say on social media,” he said. “Cancel culture and political correctness, we are against that. I am saying what needs to be said openly with passion and conviction.  There’s no taboo subject for us.”

Bernier points to the Criminal Code when it comes to dealing with hate crimes and hate speech. “Justin Trudeau is using hate speech to control what we’re on social media,” he said. Bernier says the bill will put the power in the hands of bureaucrats in Ottawa to determine what people can or can’t say online. “Maybe if you say something that a person won’t like that person would be able to complain to a big department in Ottawa and they will look at what they said and will come up with a new definition of hate speech,” he said.

During his tour, Bernier said people have been telling him they are scared about the future of this country with all “the leftist radical ideology,” adding that the PPC will be ready for the next election. The PPC wasn’t able to run a candidate in Parry Sound-Muskoka in the last election. This time around, James Tole – who was on-hand for Bernier’s visit – will run in the riding for the party. Bernier says in the upcoming election, he expects the PPC to have a full slate of candidates.

The PPC ran candidates in 315 of Canada’s 338 ridings with Benier losing his seat in the electoral district of Beauce, located in Quebec. His was the only seat the PPC had leading into the election. The party didn’t gain any during the election.

“I believe at this election we can beat the Green Party,” Bernier said, adding he believes the party will continue to grow. “Nothing can stop us,” he finished.