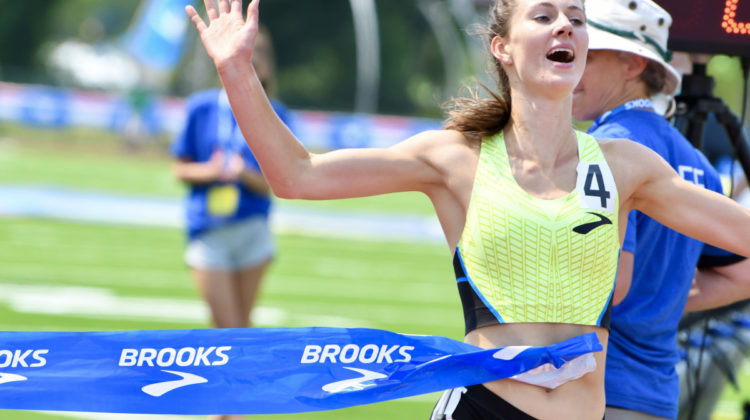 On June 4th, Bracebridge’s Natalie Hawthorn set an Olympic standard time of 4:04.20, which means she is in line to qualify to go to Tokyo as part of Canada’s 1,500-metre run team, but she didn’t officially make the team for another month.

“I was crossing my fingers, hoping I was selected,” she tells the MyMuskokaNow.com newsroom, adding watching other times come in was nerve-wracking. Setting an Olympic standard time is one of the ways to qualify for the team and she hit the qualifying time right on the nose.

Hawthorn lives in the Vancouver area so she’s a few hours behind the Eastern time zone. When Athletics Canada made the announcement of who is making the team, it happened at 7 AM her time, so she was asleep. When she did wake up, her phone had blown up with tonnes of texts and missed calls. Up until that moment, Hawthorn says she’s been doing her best to stay level-headed and not get ahead of the moment. With the Olympics only a few weeks away, she adds the wait was getting a little stressful.

“It’s been a very exciting year,” she goes on to say. Despite the COVID-19 pandemic, the past year has been one of Hawthorn’s best as a runner. “Things have come together at the right moment,” she says. The 26-year-old has dealt with injuries over her years as a runner and has also struggled to figure out a work-life balance.

It was two years ago that Hawthorn sat down and revaluated where her career was going.

She has always wanted to be a runner, crediting her parents for helping to push her. Her mother and father have athletic backgrounds. Hawthorn says she was a consistent runner when she was younger and lapping the field while attending Bracebridge and Muskoka Lakes Secondary School, but as she grew up she dealt with injuries that made her question herself. She says she did what she could to keep her head up and stay positive as she left for the University of British Columbia. “I wasn’t putting pressure on myself,” she says. “I was realizing I can only control what I can do.”

A eureka moment happened when Hawthorn travelled with Denmark with Canada’s Senior National Cross Country team. “I realized that I wasn’t setting myself up properly for success,” she says. It was a tough decision, but she decided she was going to take a step back from her job and start working part-time. She used the extra time she had to work towards making the Olympics.

Two years later, she achieved her dream. “Luckily, this past year it all came together,” she says.

The Olympics are set to start on July 23rd in Tokyo. “I’m putting in the work and I’m just happy that I’m the fittest I’ve ever been going into the biggest race of my life,” she says. Team Canada’s training camp starts on the 18th in Japan, but before then Hawthorn has a “tune-up” 800-metre race in Sacramento this weekend. The camp will be used to get used to the time change and acclimatize themselves to the region. She says they will fly to Tokyo a few days before the games start.

What’s unique about this year’s Olympics is that only local fans will be allowed to watch. That means her fiance, family and friends aren’t allowed to travel to the games with her. While she wishes they could, she says it means a lot knowing she has their support and all of Muskoka’s. Over the past few days she adds that it’s meant so much to hear from the community, whether that’s friends she still keeps in touch with or old friends from high school. “Successes in sport are really exciting, but you realize it’s the people who are cheering you on and helping you on your journey that really make it a special experience,” Hawthorn says.