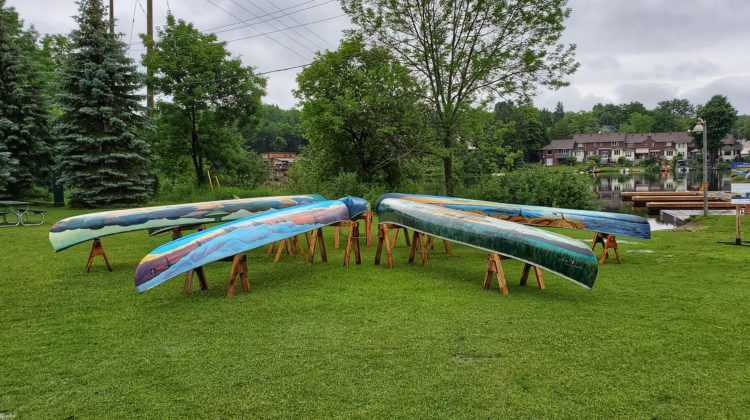 “We’re going to be working with Gerry Lantaigne and six other local artists, who will each paint one of the canoes, and each canoe will celebrate and feature the work of Tom Thomson,” says Huntsville Festival of the Arts Executive Director Dan Watson.

The Tom Thomson Canoe Murals will be painted publicly in Huntsville’s River Mill Park from July 5 to July 11, and will be displayed in River Mill Park until the end of the summer.

Lantaigne is known for his work on the Group of Seven Outdoor Gallery, which features 80 recreations of Group of Seven art. He will be joined by local artists JF Kuehnen, Helena Renwick, Tim Webb, Janine Marson, Chantelle Poisson and Zoë Valentine.

This year, the focus is entirely on Tom Thomson. Thomson, whose work frequently featured Algonquin Park, was rumoured to have been engaged to a Huntsville woman at the time of his death. Watson says the location’s importance cannot be understated.

“Huntsville is really a gateway to Algonquin Park, which was greatly important to the Group of Seven and their work,” says Watson. “They painted there, they stayed there, they canoed there, for Tom Thomson that’s where he passed away, so Huntsville is a big connection to that.”

According to Watson, the murals are a way of celebrating Thomson.

“You can see around town, there are murals everywhere of the Group of Seven, and particularly Tom Thomson,” says Watson. “Huntsville is always celebrating his work and celebrating his importance not only in Canadian art but to Canadian identity itself.”

Last year, Lantaigne painted seven canoes, each in the style of a different member of the Group of Seven, which will be moved to different venues around Algonquin Park until the end of the summer. The canoes will be auctioned off at the Algonquin Outfitters Paddle Art Auction in September, with proceeds going towards local arts and cultural organizations.