Premier weighs in on separating District of Muskoka from Simcoe County 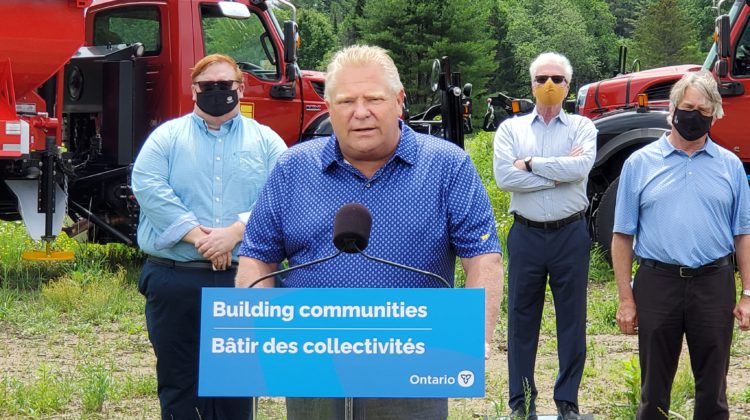 Premier Doug Ford was in Bracebridge Monday and spoke about seperating Simcoe County from the District of Muskoka (Photo credit: Mathew Reisler)

Premier Doug Ford has reignited a conversation that Muskoka residents have been talking about since the start of the COVID-19 pandemic.

“When we get through this, we may have to split that up,” Ford said Monday when asked about separating Simcoe County from the District of Muskoka.

Political leaders and business owners alike have weighed in on the subject. Ford said it’s “not fair” that people in Muskoka are feeling the effects of what’s happening hours away. “Do you know how many times I get a call from the Mayor of Huntsville, Bracebridge, Parry Sound?” he asked, adding he will talk about this with Ontario’s incoming Medical Officer of Health Doctor Kieran Moore. While not providing specific details on when it would happen, Ford said he will review the health unit border’s with the province’s incoming top doctor.

“I think we have to get through this pandemic first,” Ford added.

The question comes a few weeks after Simcoe-Muskoka was named a Delta variant hotspot. The Simcoe Muskoka District Health Unit (SMDHU) has identified 51 cases of the Delta variant – which first emerged in India – in its medical region. The conversation surrounding redrawing the health unit’s boundaries arose when people recognized the discrepancy between Simcoe and Muskoka when it came to novel coronavirus cases. As of the health unit’s latest update, there are 52 active COVID-19 cases in Simcoe and 27 in Muskoka. The percent positivity rate – which is the rate of tests coming back positive – is one percent in Muskoka and 0.9-percent in Simcoe.

Ford said he recently spoke to SMDHU’s Medical Officer of Health Doctor Charles Gardner on the subject of redrawing the health unit’s boundary.

“There’s no one that wants to open up this province more than I do,” the Premier went on to say.