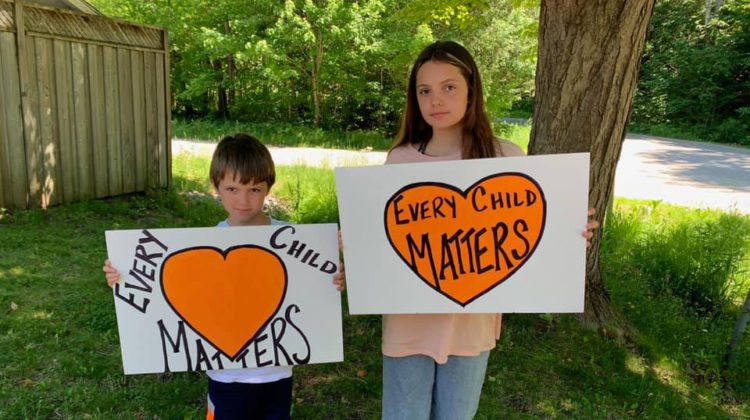 A memorial to honour the 215 Indigenous children found at the Kamloops Residential School will happen in Bracebridge on June 21.

The memorial takes place on National Indigenous Peoples Day. Volunteers led by local advocate Trisha Cowie will place 215 signs in Memorial Park to honour the 215 children found in an unmarked grave. The signs will each bear the words “every child matters,” with educational messages about residential schools on the back.

Cowie, a lawyer and member of the Hiawatha First Nation, says she hopes the memorial will motivate Canadians to act on Indigenous issues.

“It’s a moment to honour these children and give them the dignity that they didn’t receive in the past,” says Cowie. “It’s an awareness raising moment and an education moment, this has to be enough for Canadians to act, and this should be that watershed moment.”

Aitchison, who helped organize the event, says he hopes residents will take the chance to learn about Indigenous history.

“It is my hope that it’s an opportunity for residents of Muskoka to reflect and understand more of what has been done to Indigenous peoples in Canada,” says Parry Sound-Muskoka MP Scott Aitchison. “I would encourage all residents to pay their respects by listening and learning.”

Cowie says she’s been stunned by the outpouring of support from the community so far, and hopes people will be inspired to take further action.

“It’s very meaningful to so many people to not just let this moment pass, and to not change the channel onto the next news headline,” says Cowie. “We have to address this and we have to move forward on the Truth and Reconciliation Commission’s calls to action.”

The signs are displayed in Memorial Park all day on June 21, and will be moved to Hanna Park in Port Carling on June 22, Gravenhurst’s Gull Lake Park June 23, Port Severn Park June 24, and Huntsville’s River Mill Park June 25.