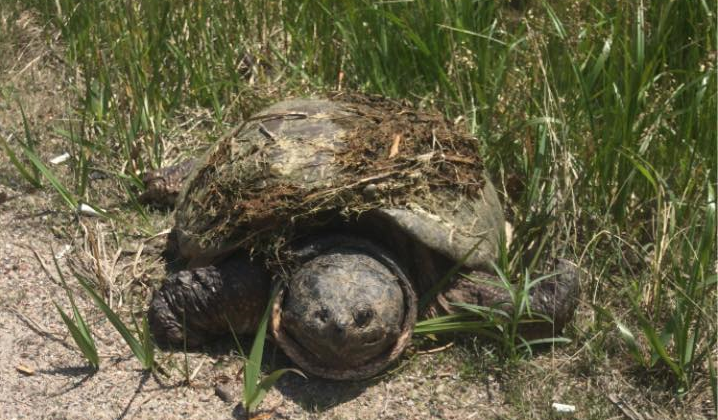 Grace, the over century old turtle, has been spotted roaming the Haliburton area (Photo credit: TurtleGuardians on Facebook)

Seeing a turtle slowly making its way through Haliburton should not surprise locals, but it’s not often you see one that’s over a century old.

Grace is a 125-year-old turtle and was spotted on the side of Gelert Road by Haliburton Highlands Secondary School. The founder of Turtle Guardians Leora Berman says she is the oldest turtle they are aware of in the area. “We’ve had reports that Grace has been known to some Haliburtonians since the 70s,” she says.

Berman says Grace also only has one eye after an accident years ago.

The old lady likes to hibernate in the wetland by the school. “Snapping turtles like to find small wetlands where the water doesn’t fluctuate so they can hibernate with enough oxygen,” Berman explains.  Grace often travels across Highland Street and Highway 118 to get food.

“Snapping turtles are the slowest turtles, but they’re also the most important turtles for our lakes and fisheries,” she goes on to say. Berman says they clean the bodies of water and the older turtles spread their eggs. Adult turtles are essential to stabilizing the turtle population for that reason. “The older the turtle is the more eggs they lay,” she says. Of those, Berman says less than one percent survive, so it could take up to 60 years for an adult turtle that died to be replaced.

The way to combat that is to hold them like a pizza tray. They can’t reach their belly so your hands will be safe. The only issue is that Grace is around 30 pounds. In her case, Berman says nudging her across the road is the way to go or using something like a shovel to help her across the road. She also suggests tossing a towel over her head to protect yourself from a potential bite. Berman says for Grace, like with any turtle, you should always move them across the road in the direction they were pointing when you found them.

“She’s a walking miracle,” Berman says about Grace, which is why they chose that name for her. She asks that anyone who spots her in town take a picture and send it to them on Facebook.