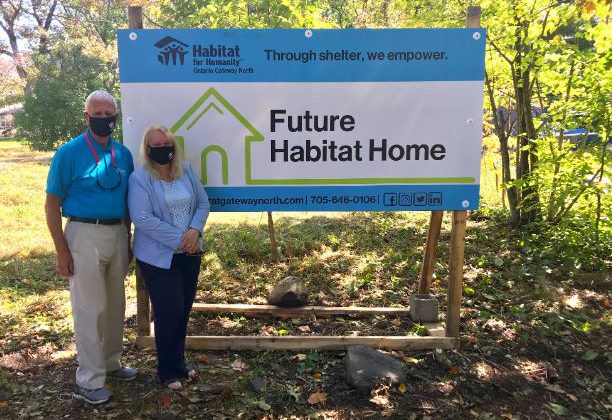 Photo supplied by: Habitat for Humanity

The District of Muskoka has signed a $155,300 funding agreement to help Habitat for Humanity Ontario Gateway North’s affordable housing project in Bala.

“We’re absolutely delighted,” Habitat’s CEO Kimberley Woodcock says, adding that this is a continuation of the partnership that they have with the District. The funding is coming from the Ontario Priorities Housing Initiative.

Habitat bought a property in Bala a few years ago and has been working on a plan to develop it into affordable housing since. Woodcock says two homes will be built in a semi-detached building, “The operating model will be deferred homeownership, which means we’re offering affordable rental for some years and then we will transfer the opportunity to an affordable homeownership opportunity.”

“The most realistic expectation for breaking ground would be next spring,” Woodcock says.

Woodcock says that it is rare for a rental to become available in Muskoka and when one does, it’s usually priced over $1,200. According to Woodcock, the forgivable loan from the District is structured so that the homes are rented at a rate 20-percent below the average market rent in Muskoka for the next two decades. Data from the Canada Mortgage and Housing Corporation (CMHC) shows that the average rent in Bracebridge, Gravenhurst and Huntsville is $1,076 as of October 2020. If that number holds, the apartments would be priced around $850.

Woodcock says the need for affordable housing in Muskoka is “absolutely undeniable.”

“CMHC defines affordable homeownership at costs less than 30-percent of total gross income,” she explains, pointing out that for “many” households in Muskoka, that number exceeds 50-percent. In turn, Woodcock says that puts pressure on the other necessities like healthy living and transportation, adding that it’s causing “more and more” people to be displaced every day.

“Not only is there a need to do projects like the one we’re embarking on in Bala but we really have to figure out how to increase the volume and we need to do that together,” Woodcock says. “No one entity will be able to tackle this on their own.”

Woodcock says the funding from the District will go a long way but volunteers will need to raise $215,000. So far only $80,000 has been donated but Woodcock says events over the summer should bring in more donations. Details on those events are not final but Woodcock says to keep an eye on Habitat’s Facebook page.