Bracebridge resident spreading joy one chalk drawing at a time 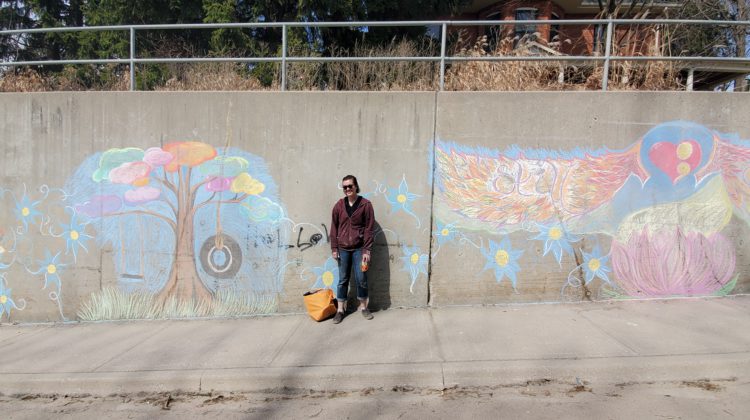 Marie Bowman started doing chalk drawings just across the train tracks on Taylor Road to keep herself preoccupied but ended up bringing joy to many others in the community.

“It all started last year when the pandemic started,” she tells the MyMuskokaNow.com newsroom just after finishing her latest drawing. “I felt like I really needed to get outside.”

Since she was young, Bowman says she’s loved to doodle and draw with chalk. She grew up in North Dakota in the United States but moved to Bracebridge in 2019 with her husband since he’s from the area. “I was having a really hard time finding a job,” she explains. “I finally found a job, then COVID happened and I was laid off.”

After spending most of the next few months inside her apartment, Bowman says she decided to find something to do that would get her out of her apartment. “I’m really shy, so I didn’t want to knock on a random business’ door and ask if I could draw on their building,” she says. Eventually, she found the wall along Taylor Road at Front Street and knew it was the perfect spot to set up shop. Bowman jokes that the wall seemed like a good place to draw and not “irritate” anyone.

“I was hoping other people would enjoy it, and it turns out they have,” she says. Initially, though, Bowman was worried people wouldn’t like her drawings and would think they’re silly or immature.

Since posting the drawings on our Facebook page, listeners have overwhelmingly thanked Bowman for what she’s doing. “I saw the artist doing this today made me smile,” one person said. “Great work!”

Bowman says the comments she’s gotten have been “encouraging and humbling” and people able to interact with people who come up to her while she’s drawing have made it all worthwhile. “It’s been a little overwhelming,” she says. “It’s hard to think of something that little having such a big impact.”

“I didn’t think that this whole pandemic would last more than a month,” Bowman says. “I think a lot of people thought it would be over relatively quickly. It’s a year later and we’re still in the same situation just about.”

She knows that this has taken a toll on small businesses and it’s starting to wear on people’s mental health as well. “As a young person trying to find a place to live, and juggling rent, we’ve all got to be really tough right now,” she adds. “It’s nice to have a creative outlet.”

Now that Bowman has a job, it makes scheduling time to draw a little more difficult. She says that whenever she has the time and is in the right headspace, she draws. Bowman says she plans to continue drawing to keep herself busy and, hopefully, brighten other people’s day.