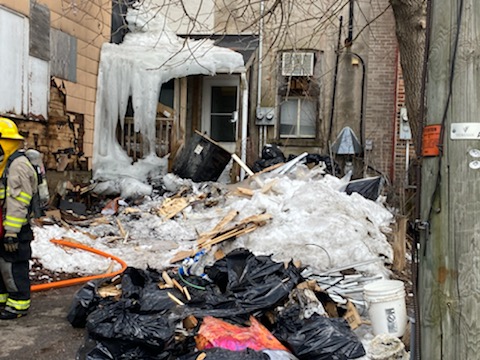 The aftermath of the fire (Photo credit: Ashley Pirhonen)

The Gravenhurst Fire Department responded to a call that debris behind a building at 121 Bay Street had caught on fire.

Deputy Fire Chief Todd Clapp says a new business is moving in so renovations have been ongoing this week. “They noticed some smoke in the area and came outside and found a large amount of debris was actually on fire,” he explains. Bigrigg says they acted quickly and used fire extinguishers to attempt to contain the fire. They were able to contain it until the fire department arrived.

Clapp says he’s thankful for a concerned resident who helped direct traffic until firefighters showed up.

“It’s still under investigation, but we don’t believe it to be suspicious at this time,” Clapp says.