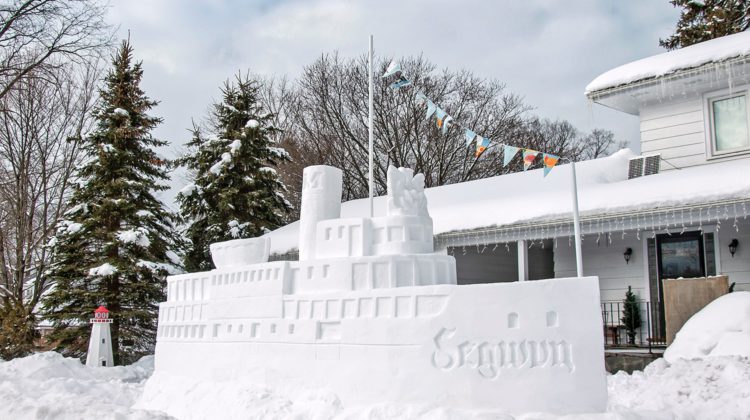 While some were disappointed to find out Gravenhurst’s Winter Carnival would be cancelled, Andrey Petrov and Caroline Petrova decided they would take the festival to their front yard on Hotchkiss Street in Gravenhurst.

Petrova tells the MyMuskokaNow.com newsroom they usually carve a sculpture at the carnival. “We decided we would build something with a bit of local interest in our front yard,” she says. That’s when she and Petrov decided to create the RMS Segwun.

According to the Muskoka Steamships and Discovery Centre, the Segwun is North America’s oldest operating mail steamship at 134 years. When the ship was in its heyday, it needed 250 tons of coal to last its four and a half month sailing season, according to the centre. “Her ability to adapt to 130 years of changes is a model to us all, as North America’s oldest operating hand-fired steamship, the RMS Segwun is the recognized symbol of Muskoka with many believing that her haunting whistle sounds out as the official “heartbeat” which awakens the region each spring,” a description of the boat reads on the centre’s website.

“We started during last week’s heavy snowfall,” Petrov explains. He says they used recycling bins, saws and knives to shape the blocks. The snow was left in recycling bins overnight to harden before they were stacked and smoothed out and detailed using a saw.  “It took three to four days,” he says.

“We started eight years ago when we lived in Northern Ontario,” explains Petrov. “It actually started as a joke, my wife asked me if I could build a snow castle and I’m like ‘okay’ and built something.” He says that since then it’s become a yearly tradition.

Petrova says in the past they’ve built the Saint Basil’s Cathedral and Notre Dame Cathedral. He says the biggest sculpture they made was a snow fort a few years ago. While not as detailed as some of their other creations, Petrov says it dwarfs them in size.

“It has gotten a lot of positive attention,” Petrova says. She adds that she will often look out her front window and see people taking pictures with it. “It’s just nice to see them smile,” she adds.