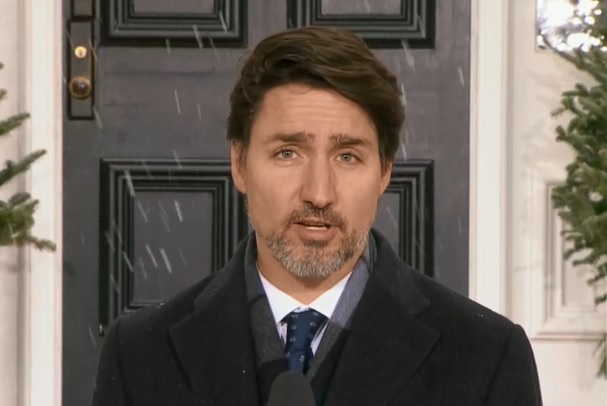 It was a familiar message from the Prime Minister this morning.  Justin Trudeau reviewed the projection data that was supplied by the Chief Medical Officer saying that if we all do our part to be diligent with physical distancing, self-isolation, and hand washing we may see the peak of the spread of COVID-19 in late spring with the first wave ending in the summer.  But he warned there will be smaller waves until a vaccine is found.  He said that Canada is behind other countries because the virus arrived in the country later than others. He said we are in a “fork-in-the-road” and the decisions that we all make now will be the difference between the best and worse case scenarios.

Trudeau spoke of the anniversary of Vimy Ridge over 100 years ago saying in part, “We have gotten through tough times together and at Vimy Ridge more than a hundred years ago today, thousands of soldiers fought to defend the values that we hold dear.  As historians have noted it was a moment that ordinary people did extraordinary things, their legacy lives on in the people who step up to ask what they can do for their country. That is what makes Canada strong and that will be our path forward.”

Trudeau addressed the bleak unemployment numbers released earlier today that show 1,011,000 people are now jobless because of the pandemic.  Trudeau said we knew this was going to be a tough time.  He said 4.5-million Canadian Emergency Response Benefit applications have been processed and people are starting to get much needed financial support, “Things will get better, our economy will come roaring back.”