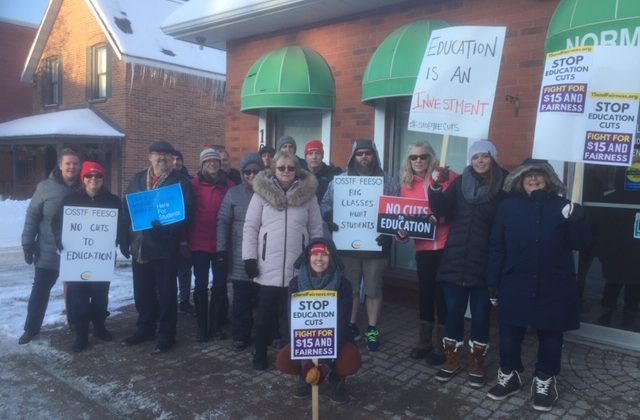 OSSTF District 15 was the main organizers of the rally and they wanted to get their message across to Miller that discussions have been going on long enough.

In an interview with the MyMuskokaNow.com newsroom, Colin Matthew the President of District 15 said that the province needs to come back to the bargaining table looking to actually make a deal because “they have just been hammering away at the same positions.”

Matthew said that they were in front of Miller’s office because they are looking for Conservative leaders to “step up and talk to the Minister of Education and the Premier.”

“The MPP needs to pass along the sentiments of the parents and the teachers and say these cuts are not good enough for our kids,” said Matthew.

When asked about how much of a raise teachers are looking for, Matthew said that the offer from the OSSTF on the bargaining table references the cost of living and not a set number. “What that means is that as the cost of living goes up every year, teachers will be able to make their wages accordingly.”

Matthew said that he believes that the stance that the government has taken is “purely ideological rather than fact.” He said that what the OSSTF has done is collected the statistics and facts about what educators need.

Diana McConnell a representative from The Power of Many was showing her support at the rally as well and said that even though she isn’t an educator, she is a parent who is concerned about how nothing is getting done. “I believe that everyone deserves to make a wage as the cost of living goes up.”

When asked about what she thinks needs to happen, she said that “Miller needs to wake up because the majority of our community is behind educators and larger class sizes are not good for our kids and mandatory e-learning doesn’t help every student.”

Matthew said that there are rally’s like this all over the province and the public want their voices to be heard.

MPP Miller was not available for comment at the time of publication.