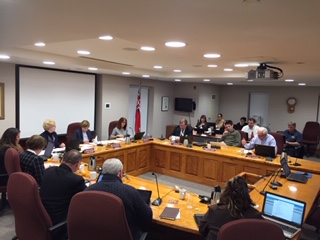 HUNTSVILLE, ON-Huntsville’s Deputy Mayor has put her name forward for the Mayor’s position.

Deputy Mayor Karin Terziano confirmed on December 10, that she will be running for the next mayor of Huntsville.

In an interview with the MyMuskokaNow.com newsroom, Terziano said that she has several years of political experience under her belt and because of that, she feels that she would be a good mayor. “I have been fortunate over the past five years to have been Deputy Mayor and over the past four months I have been acting Mayor, while it has been a learning curve, it has given me the opportunity to say yes I can do this,” said Terziano.

When asked about what she wants to work on if she is appointed, Terziano says that while she may make small changes, she wants to stick to the plan that she and the council members have set for themselves. “I want to follow the same course and the same plan that we have outlined in the last year,” said Terziano.

During the meeting where council appoints a Mayor, Terziano says that she believes they will be appointed immediately. “Once the Mayor is appointed, there will begin a transition period where we will have to choose a person to fill their ward spot,” said Terziano.

Since the decision to appoint a new Mayor, Councilor Tim Withey has been vocal in his displeasure in councils decision and on December 5th he claimed he would abstain from the process and would rather hold an election.

When asked about Withey excusing himself from the process, Terziano said that councilors have a responsibility to vote in situations like these. “Even if he chooses not to vote, it automatically counts as a vote against, this appointment will happen and his vote will count,” said Terziano.

The council is set to appoint the new Mayor on December 17th at around 9:00 a.m.