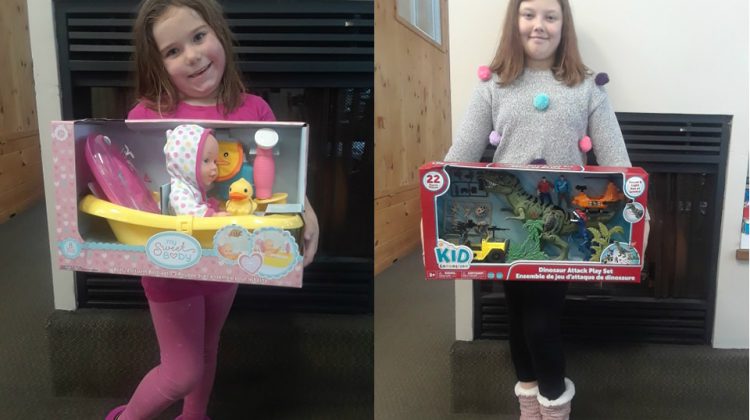 Layla & Natalya, children of one of Lake of Bays Lodge employees with their donations. December 10, 2019. (Submitted by Ashley Flemming)

LAKE OF BAYS, ON – One organizer doesn’t want people making donations this holiday season to forget there is a need in smaller communities too.

Flemming created the event because she used to be in a low-income situation herself. She said people tend to think communities in northern Muskoka are wealthy because it is considered “cottage country,” but that is a misconception.

“There are still people north of Bracebridge in need,” Flemming said. “I am in a much better place now and I am trying to show my younger daughters what it is like on the other side. I want us to help families the way we’ve been helped in the past.”

Flemming said there is no specific goal for how much they want to collect. Toys for boys and girls of all ages are being accepted along with non-perishable food items.

“There’re a lot of food drives going on but there is also a lot of people in need, so the more stuff we can get, the better” Flemming said. “We are looking for anything for your typical Christmas dinner. If someone were able to do something like turkeys, that would be fantastic.”

Donations can be dropped off at the Lake of Bays Lodge or the Pharmasave and Up North Games in Huntsville. The drive will continue until December 20th.

Take-home COVID-19 tests to be offered at Ontario schools