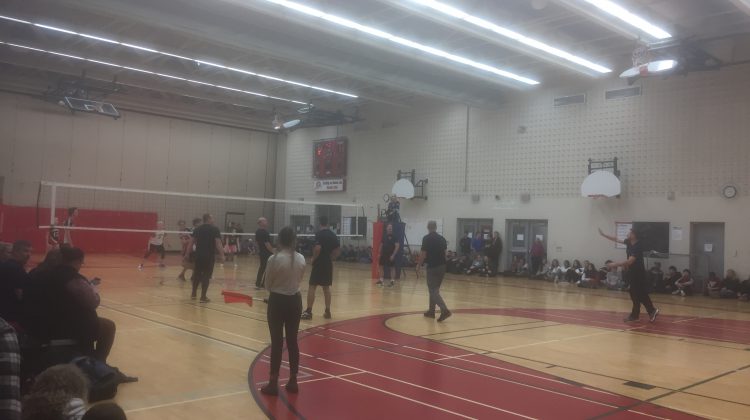 At around 2:00 p.m. the gymnasium at BMLSS was packed with around 250 students, who watched their volleyball team go up against 10 officers to raise money for the United Way.

Each student was to bring $2 to give to the United Way which the OPP supports every year.

Tammy Whitehead, an Administrative Clerk for the Bracebridge OPP was one of the people who help set up the game today as her daughter is on the volleyball team that is coached by Teacher Christine Moore.

According to Whitehead, it was Moore that ensured that the partnership between the OPP and the school would result in the students contributing to the charity.

While the final amount raised is not known, Whitehead says that she felt they raised a lot of money.

Inspector and Detachment Commander Micheal Burton said that the last three months of each year is when the OPP does a lot of their outreach and charity work. Their partnership with the United Way has lasted many years.

Whitehead also said this is not the first time the OPP has challenged the high school, and that the OPP likes to come out to BMLSS and establish relations with the students.

While no next charity has been set for the OPP, Burton says they are happy to support the United Way as they feel that the organization does important work.