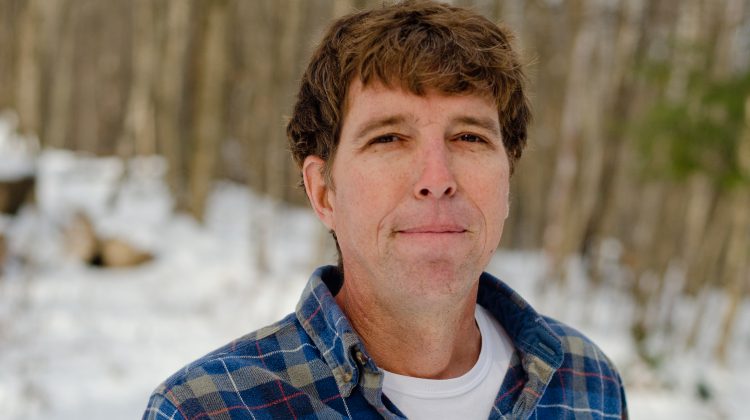 Brent Morris is shown near his home in Huntsville on November 13th, 2019. Photo by James Wood/MyMuskokaNow.com

Morris, who has lived in Huntsville for 23 years, is in the fight of his life. The bad news came two years ago, when he was told that he had roughly three to five years to live.

He received a diagnosis of terminal prostate cancer in his early forties, and is currently enrolled in a clinical trial.

While there has been some improvement over the last six months, he doesn’t know if he has the real medication or a placebo.

Despite that uncertainty, Morris doesn’t worry, and tries to take things day by day, enjoying a retirement with his wife Becky and their animals at their home near Peninsula Lake. 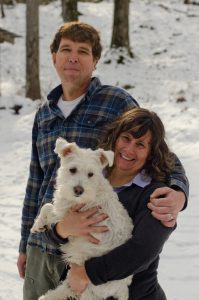 Brent Morris is shown with his wife Becky and dog Cooper on November 13th, 2019. Photo by James Wood/MyMuskokaNow.com staff

However, he wants to warn other men about the danger posed by prostate cancer, in the spirit of Movember. He believes that if he had gone in for proper testing sooner, he could have avoided the situation that he currently finds himself in.

“It was ten years of back pain, going to my doctors here, and just being told to stretch and exercise,” said Morris.

“That’s what I did for 10 years, with a sore back. It finally got to the point where I left work for a season two years ago for a layoff and I had to get my back fixed that season because I didn’t think I could work anymore.”

After receiving treatment from a chiropractor, Morris went to the Huntsville hospital to get scanned when the chiropractic treatment failed to help. Around this time he began to experience issues with his left leg. He was rushed to St. Michael’s Hospital in Toronto, when the scans showed signs of cancer on his spine.

After treatment in Toronto, Morris can still walk, but the cancer had continued to spread.

He had thought about getting checked for prostate issues when he was in his late thirties, and went in at 40. At the time, his doctor said it wasn’t needed.

“I felt I was just getting older, my bones are getting sore,” said Morris.

“I didn’t even think it was bones, I thought it was just my muscles that were sore. Just a pain that I couldn’t really (shake). I knew I was getting weak, I didn’t feel like snowboarding anymore, was having trouble keeping up with the wife on the hill, then finally we found out what was going on.”

There is a simple blood test available for a cost of $30, available to men to be screened for prostate cancer. Morris is an ardent advocate for men to get checked.

“The best bet is to get a blood test,” said Morris.

He thanked everyone taking part in Movember this year, and hoped for a cure to be found soon. He also had advice for anyone facing a similar situation.

“You have to be positive,” said Morris.

“You’ve got to live each day, as best you can. When you get thinking about the disease and the things that can happen, or the things that are going to happen, it brings you down and you wreck days. You can’t waste any days right now. You have to enjoy every one, doing the things you want to do.”

He believes people need to be their best advocate.

“If you see anything that’s different with your body, say a mole that’s changing, get it checked out,” said Morris.

“If it is changing, don’t take no for an answer. If your doctor won’t get on board, you’re going to need another doctor. Keep advocating for yourself.”

Becky also said that anyone trying to seek out advice on their own should try to avoid getting sucked into “vortexes” of information online.

“Read what you can, decipher what you want, everybody has their own ideas on what to do when they get a cancer diagnosis,” said Becky.

The couple thanked their family and friends for their support, as well as everyone who has helped them since the diagnosis.

They had specific thanks for the following people:

-The pharmacy team at the Huntsville Shoppers Drug Mart

More information on prostate cancer can be found here: https://www.prostatecancer.ca/prostate-cancer/testing-and-diagnosis