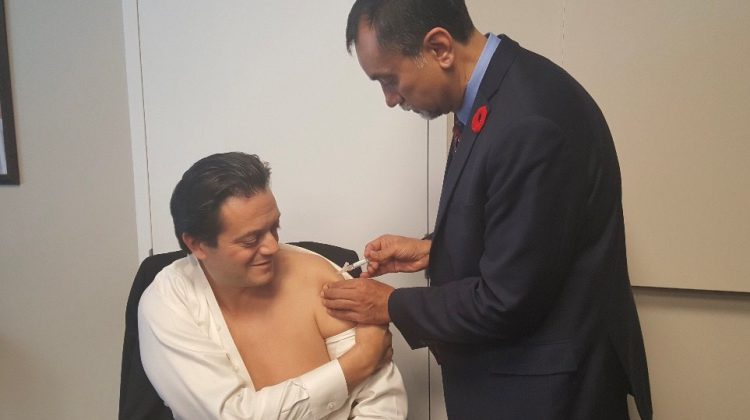 BARRIE, ON- The Simcoe Muskoka District Health Unit is reminding parents that vaccines are safe.

The unit and the Ontario Medical Association (OMA) sent out an announcement today, reminding parents that keeping their children’s immunizations up to date is an important way to keep both them and the whole community healthy.

“On behalf of Ontario’s 31,500 practicing doctors I want to say that vaccines work, vaccines are very safe, vaccines are vital to the health and well-being of us all and parents should not be swayed by the misinformation they find online,” said Dr. Sohail Gandhi, President of the Ontario Medical Association, in the announcement.

The health unit plays a critical role in protecting the health of people in the region.

“Vaccination is one of the most successful public health interventions in history. It has led to the elimination and control of dangerous and infectious diseases such as smallpox, polio, diphtheria, measles, and pertussis (whooping cough),” read the release.

“It was not long ago that these diseases caused many Canadian children to become severely ill or die.”

Measles is used as an example in the announcement. The disease, which children are more vulnerable to, can cause pneumonia, brain inflammation, and serious problems for years after infection. When a large part of the community is immunized, which would be around 95 per cent for measles, the disease can’t spread easily.

“In Simcoe Muskoka, the coverage rates in 2018-2019 for the nine vaccines required under the Immunization of School Pupils Act range from 91.5 per cent to 94.8 per cent,” said Dr. Gardner, the medical officer of health for Simcoe Muskoka.

“While these rates compare favourably with the rest of the province, we still seek to improve on them. We are concerned that some people are becoming hesitant about immunization because of misinformation being spread. Vaccines are safe and effective, and by being immunized, you protect your family, friends and people you work with.”

The announcement goes on to say that 63 per cent of parents in Canada look for immunization information on the Internet and half of these do a simple Google search.

“This is very concerning because much of the information circulating about vaccination on websites and social networks is unreliable, inaccurate and may discourage parents from getting their children vaccinated.”

The announcement today is part of the OMA’s efforts to fight that disinformation.