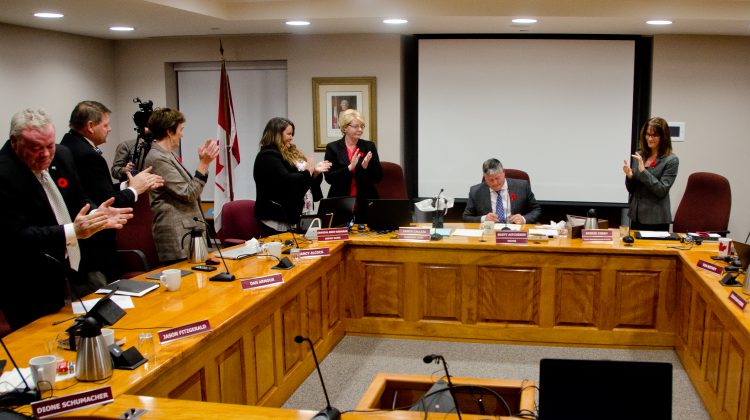 HUNTSVILLE, ON- Scott Aitchison has tendered his resignation.

The now-former mayor of Huntsville marked his last meeting as leader of the community this evening, in the wake of his win of the riding of Parry Sound-Muskoka in the recent federal election.

After the brief meeting, which dealt with multiple matters that had taken place while Aitchison was campaigning, council and staff paused to mark the final time Aitchison would sit in the mayor’s chair.

Huntsville’s CAO Denise Corry went first, thanking Aitchison for his service and saying that he made all the town staff feel valued. She offered a “huge thanks” and wished him good luck in his future political career.

Deputy Mayor Karin Terziano followed. After saying that she wasn’t sure whether to address him as the mayor or “the Honourable”, she said that both staff and the current town council have enjoyed Aitchison as both a mayor and a friend.

She said she had picked up skills from watching Aitchison, and presented him gifts. One was the town’s Canadian flag that had been flying from Town Hall on the mayor’s final day in office. Another was a plaque, commemorating a “mayor’s garden” outside Town Hall, which Aitchison is invited to weed while in Huntsville visiting constituents.

The last was a set of photos, which featured the first council that Aitchison had served on after being elected and a photo of Town Hall, among others. 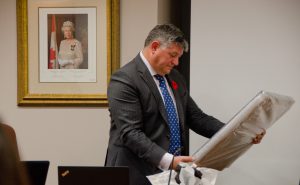 Now-former Huntsville mayor Scott Aitchison looks at a gift of photos at the end of his last council meeting on October 28th, 2019. Photo by James Wood/MyMuskokaNow.com

The rest of council followed Terziano, thanking Aitchison for his service.

After the round of thanks was done, Aitchison gave his final address, thanking everyone for their kind words and saying he was happy to have worked with every one of them.

He said he had spent the past 25 years working in and out of Town Hall, and thanked past Huntsville mayors for their advice.

“Until you’ve been the mayor, you don’t really know what it’s like,” said Aitchison.

“I learned very quickly to rely on those folks who had been here before, because they get it more than anybody. To each of you, I want to thank you so much for the support you’ve given me, I’m honoured that you’re here tonight, that means a lot to me.”

He also said he was honoured by the presence of other municipal leaders from across the region, who had come to see his final meeting.

“I’m excited to start that next chapter, but it is a bittersweet moment,” said Aitchison, towards the end of his speech.

“I’ve loved serving on this council, my whole life. And being the mayor has honestly been the biggest honour of my entire life. Working with all of you is something that I will never, ever forget, and leading this community has been the most enjoyable thing I’ve ever done. And I’ll never have a better title than Your Worship. I swear it doesn’t get any better than that.”

He said he would still be around, though he wouldn’t be in the mayor’s chair anymore. Instead, he said he would be working with other communities in the riding, and across Canada.

“This has been a great training ground for me,” said Aitchison.

“I thank you all for your hard work and your effort and your support, I’m going to miss you very much.”

After a standing ovation, Aitchison told everyone to sit down, and passed the motion to adjourn the meeting, ending his time as Huntsville’s mayor.