Muskoka mom sent to hospital after encounter with toxic caterpillar 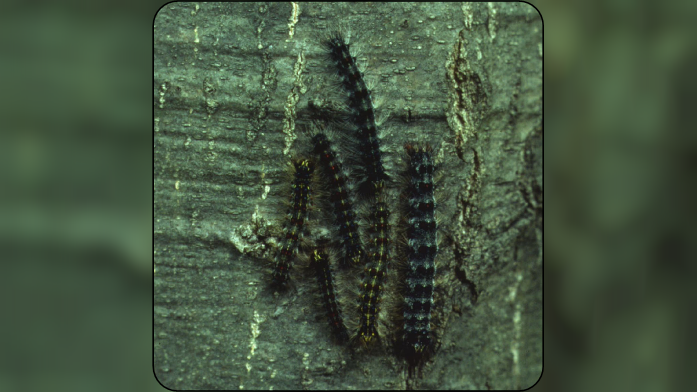 BRACEBRIDGE, ON – An invasive species put a Muskoka mother into the emergency room.

Nicole Porter said she was having a regular afternoon on September 19th, getting her son ready to leave home for the day when she felt a tickle on her back. She ignored it at first, but then asked her son if there was something there.

Her son said there was a caterpillar on her. By this time, Porter said her back started hurting and her husband had to remove it.

“I don’t know if I am getting bit or getting stung,” Porter said. “I’m glad [my son] didn’t touch it. My husband came in and got it off and we kept it alive because it wasn’t your typical caterpillar.”

Porter said the rash it caused eventually spread all the way across her back, from down to her left buttocks to over her shoulder, down her arm and onto her hand. 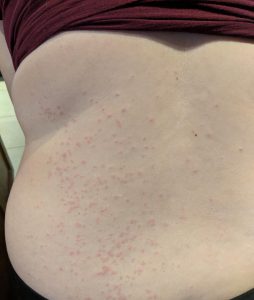 The rash on Nicole Porter’s back caused by the gypsy moth caterpillar. October 1, 2019. Submitted by Nicole Porter)

After spending days in pain and the rash getting worse, she decided Friday night that if it didn’t get better by Saturday morning, she would go the hospital.

“I felt like I had been hit by a truck,” Porter said. “Especially in the area where it was. It was weird because it was just that side. I knew it was something. By Saturday I was in emerge and they kept me there all day.”

Porter said she was put on an I.V. of steroids in an effort to fight the rash. According to Porter, doctors said she was the first patient in Bracebridge to go to the hospital for an encounter with the type of caterpillar.

She said they had heard of patients at other hospitals, so they were able to recognize and diagnose the problem.

According to Porter, doctors believed the caterpillar would turn into the gypsy moth, a species listed as invasive on the government of Ontario’s website.

Porter said she was lucky she wen’t in when she did because the toxins were potentially hours away from affecting her breathing.

“I am still dealing with a rash,” Porter said. “It’s not as bad, but it’s still really itchy. It’s not contagious either.”

Porter said what happened was the caterpillar’s hairs made microscopic cuts into her skin and released toxins.

“Because I left it and didn’t know any different, I just laughed it off at first, it got worse because the toxins keep going,” Porter said. “I read up on it and found out you have to remove the hairs, so my husband duct tapped my entire back and pulled them out that way.”

“The doctor said had I not gotten them out and waited the two days I did, it would have been an even more severe reaction.”

She said the hairs can be like getting a burr stuck on your clothing. So the longer they were in her dress, the more damage they were doing.

Porter said she shared the story on Facebook just to warn her friends and family that these insects were out there, but it ended up going viral.

The post has currently been shared over 2,000 times and has over 400 comments. Porter said as embarrassing as it is to be know as “the caterpillar lady” she will embrace it if it means other people can avoid ending up in her situation.

She added that now that her family is aware of them, they have noticed the bugs even more around Bracebridge. Porter said there are different variations because they have been breeding with other species of caterpillars, so they don’t all look the same.

“They’re on our house all the time, they’re on the trees,” Porter said. “The more we’re keeping an eye out for them, the more they’re popping up.”

Porter added she grew up in Muskoka and played with caterpillars when she was young. She said it’s disappointing she has to teach her son to be more careful.

“That’s my main concern. That I live in a place around kids and I have a little guy,” Porter said. “Now I have to teach my son not to touch any of them. I am glad he or my husband didn’t just swat it off my back.”

According to Ontario’s website, the insects are native to Europe and have an established population between Sault Ste. Marie and North Bay.