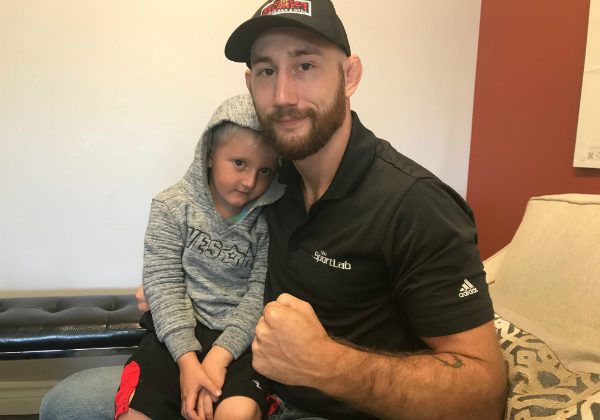 HUNTSVILLE, ON – Huntsville’s Kyle ’The Monster’ Nelson has registered his first win as a UFC fighter.

The 28-year-old Muskoka fighter has just returned from Mexico City where he had his third fight in the UFC. He  beat Mexican-born fighter Marco Polo Reyes Saturday night via first-round TKO with a flurry of elbows and punches.

Nelson is 1-2 as a UFC fighter, having lost his debut last December as a short-notice fill in, and then getting knocked out at an event in Ottawa in May.

The unassuming brawler was making the rounds of Muskoka media outlets to tell his story and thank sponsors like The Sport Lab and Moose Delaney’s where he worked as an 18-year-old washing dishes.

Nelson said his mental preparation for this latest fight was just right. He thinks he did not necessarily plan properly for those previous efforts because he got caught up in trying to make a big impression to fans, family and UFC fight schedulers.

“Physically and skill wise I am always improving but it is the same skill and ability I had in the other fights,” he surmised. “I think it was the mentality going into this one. The first fight was super short notice, didn’t know what to expect and got in there too hard, too soon.”

He said the pressure in the Ottawa fight was to convince organizers he belonged.

“Because I was on the big stage in the UFC I still wanted to be really impressive and get the knockout super fast and ended up wearing myself out,” he admitted.

Mexico City was different, he said.

He said the physical preparations are vital too, but not emptying the tank too soon helps preserve a fighter for the later stages of a bout.

“It doesn’t matter how good you are. Once you hit that level of exhaustion everybody falls back down to the same level,” he said.

The victory was vital to keeping him on the UFC roster for the future he admits. With two straight losses typically a fighter will be shown the door, but Nelson has shown he is competitive, but registering a knock-out against a name like Reyes will give promoters something to think about heading into 2020.

It is hard to match the man they call the monster, as he cuddles with his son Korbin who is celebrating his fifth birthday. He said it has been years of sacrifice, missing things like birthdays and holidays, but with a quiet confidence one can see it just might have all been worth it.