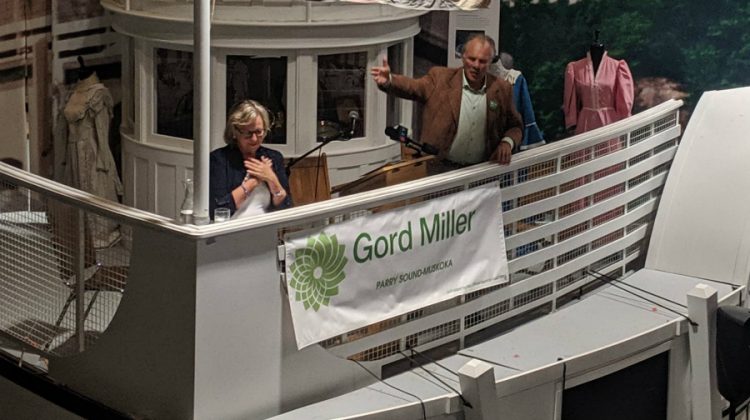 Green Party Leader Elizabeth May being embraced by Parry Sound-Muskoka Candidate Gord Miller and the rest of the crowd during her stop in Gravenhurst. September 17, 2019. (Greg Higgins, MyMuskokaNow staff)

GRAVENHURST, ON – Elizabeth May almost broke into tears at the Muskoka Discovery Centre as hundreds of supporters clapped, hooted and hollered after she finished her speech.

The leader of the federal Green Party was in Gravenhurst to support Parry Sound-Muskoka candidate Gord Miller Tuesday night.

Miller opened up talks with the climate emergency and how close the world is to a potential economic disaster. After a 10 minute speech of his own, he opened the floor to May to a wave of applause.

The Green Party Leader started by talking about her relationship with Stan Darling, a Progressive Conservative who was the local MP from 1972 to 1994. She said he was one of the key players in making Canada focus and deal with the issue of acid rain.

May then shifted to the main issue her platform is tackling, which is climate change. It wasn’t necessarily pollution she thinks is playing the main role when it comes to the deterioration of the environment.

“I have discussed this a lot with David Suzuki and I’ve come to agree with him that the biggest problem we have is in politics,” May said. “Not democracy, politics. Leader after leader seems to think the best thing they can do is the minimum requirement for people to think they’re not bad people.”

May said the emissions target for carbon needs to be 60 per cent reduction by 2030, not 30 per cent like it is now.

The Green Party Leader did talk about how her plan would help local communities. She said all the flooding experienced in Parry Sound-Muskoka is a clear sign of climate change.

May also wants to help smaller communities get better access to public transportation.

“We have a bus system in some of our rural and remote communities in Canada that is inferior to that of Mexico,” May said.

She added areas like Muskoka and Parry Sound deserve a train service for normal people with normal schedules, which got big applause from the audience.

May was asked by a crowd member how people can be more energy efficient in heating their cottages in the winter, to which she replied “insulation is the key.”

Miller reiterated some of May’s points, adding on how climate change is affecting local residents. He said the flooding is causing insurance companies to stop covering certain areas, which makes selling a home near impossible.

He then announced this would be just the first of four separate talks he will be doing over the next few weeks. He will be heading to Bracebridge, Hunstville and Parry Sound for an overall total of 16 rallies.