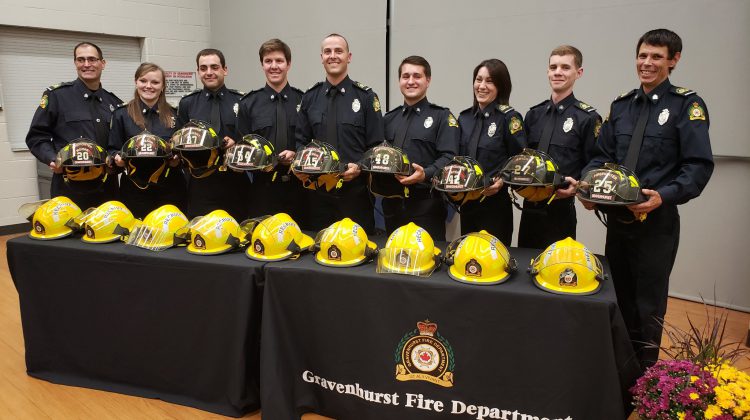 GRAVENHURST, ON – A new crop of graduates at the Gravenhurst Fire Department were sworn in last week.

Nine fresh faces will now help answer the call when the fire bell rings. For Chief Larry Brassard it is always a proud moment to have new members take the oath because it shows the continued growth of the service in the area.

“The cycle never ends and there aren’t a lot of old guys sitting around the table anymore,” revealed Brassard. “That notion of those days is long gone.”

He points to one of his female members, Tracy Jocque, as the only member of the department to have a 20-year pin.

Brassard is equally proud of the job his department does in working with other Muskoka departments during big fire events like the Timber Mart fire this summer in Bracebridge.

“Those kinds of relationships are established well in advance of that fire occurring,” said Brassard.

Typically crews will train together on multiple weekends, getting to know each other and each department’s equipment and how it deploys.

“That pays dividends like on that Timbermart Fire where we have to come together and work together,” Brassard said.

The Chief said being a firefighter for any of the volunteer departments is not just a big commitment from the recruits, but their families, significant others and their full-time employers.

“Those employers who choose to support their local volunteer fire departments provide an immense support to us,” agreed Brassard. “Without those men and women being able to leave those jobs and come to the emergencies in the middle of the day, it would not work.”