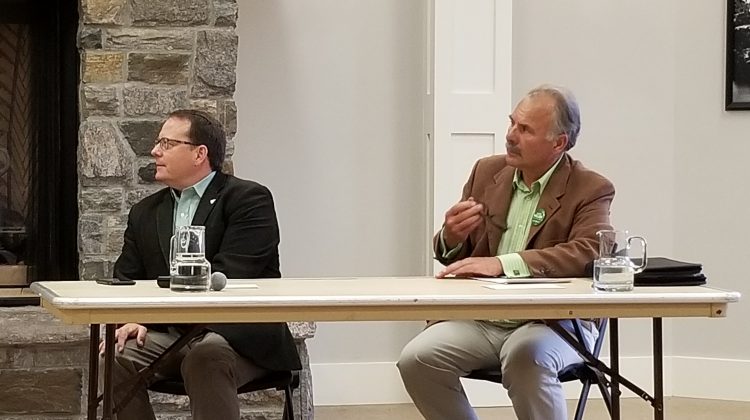 HUNTSVILLE, ON –  The various candidates running for federal office in Parry Sound-Muskoka have gotten their campaigns off the ground.

On Sunday the Green Party, with candidate Gord Miller confirmed, welcomed the Ontario Green Party leader Mike Schreiner to provide some context of the party’s ethos provincially and federally.

The MyMuskokaNow.com newsroom had a chance to speak with Schreiner ahead of his weekend visit.

About 30 people were on hand to hear the pair introduce the party platform at a meeting held at the Active Living Centre in Huntsville.

He said he was pleased to help get some visibility for Miller, who is running as a Green for the first time.

“I’m excited to be in Muskoka supporting Gord Miller,” said Schreiner. “He is a fantastic candidate.”

Schreiner offered what he thought some of the key issues were, and not surprisingly for a party focused on the environment, climate change was near the top of the list.

“The climate crisis has confronted people in Muskoka head-on and people are looking for solutions,” he said.

He noted that housing was also an issue for the average year-round Muskoka resident.

“There is a number of other issues surrounding housing affordability, health care, that are deeply concerning to people,” said Schreiner. “The fact that the Green Party wants to increase those kinds of investments, unlike what you are seeing in Ontario with cutbacks to essential services.”