Thrift store robbery not reflective of the community says Lieutenant 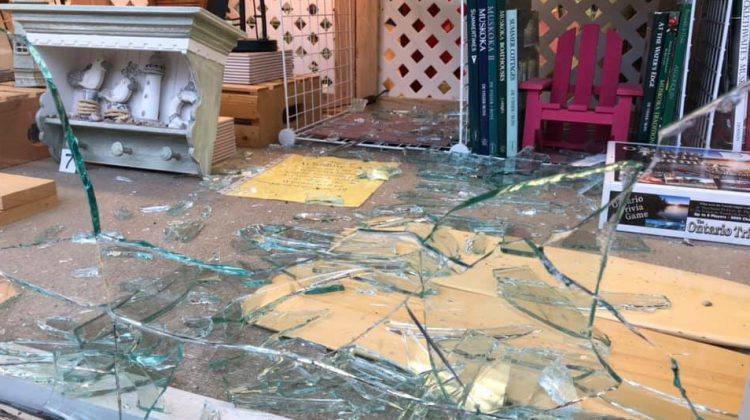 BRACEBRIDGE, ON – An overnight act of vandalism and theft has been committed at the Salvation Army Store in Bracebridge.

Sometime Tuesday evening into the early hours of Wednesday morning a thief or thieves used a cinder block to smash the main show window at the Thrift Store location at 185 Manitoba Street.

A number of auction items were stolen from the display area of the window. Among the items stolen were a small wooden canoe, a clock and a telescope.

According to Lieutenant Ian Robinson, it is a distressing incident on a couple of levels, most of which is that much-needed money will now be used to pay for repairs rather than going to vulnerable members of the Muskoka community.

“Taking it to the next level this is potentially money that would have gone to food programs or other programs for people in the community,” said Robinson.

Even with insurance, a deductible payment will have to be made. Beyond that, the items were part of a number of auction lots that will now have to be reconfigured with new items.

The auction items are part of ongoing campaigns to generate interest in the offerings of the thrift store, so attaching an exact value of what price they might have sold for is difficult said, Robinson.

“It’s very hard to nail down potential value. They are from a few of the different auction item groupings that we had so depended on how high they would have gone it’s hard to nail down,” he said.

Revenue from Thrift stores is used to run other programs including feeding families, emergency response to disasters and various social services.

The store did not have a video system and Robinson is hoping businesses in the area might be able to provide a key to the crime from their own systems.

The one positive coming out of the event, he said, is the reaction of residents both on social media and in person. One regular customer brought a potted plant to display in the window area until it gets replaced.