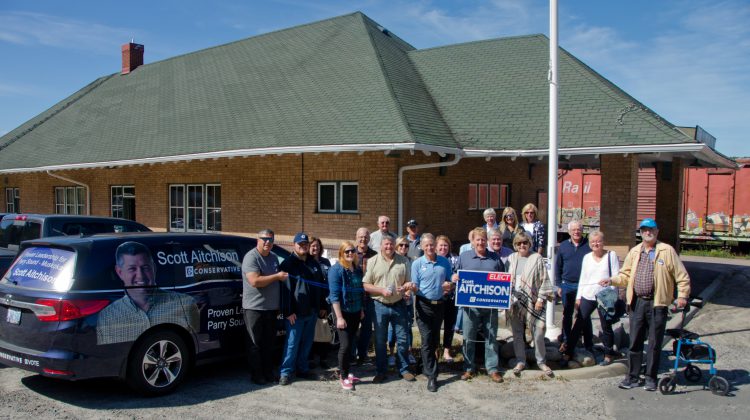 HUNTSVILLE, ON- Scott Aitchison has finished his campaign offices.

Aitchison has been making the rounds around Parry Sound-Muskoka in recent weeks, opening up campaign offices in Parry Sound and Bracebridge. The third and last office was officially opened today in Huntsville, at the community’s old train station near the downtown core.

The Huntsville opening had a small group of supporters and volunteers in attendance, with a free BBQ and Aitchison speaking with attendees. He will be running for the Conservative party in the riding, while on a leave of absence from his role as Huntsville mayor.

Aitchison told the MyMuskokaNow.com newsroom that he’s already been door-knocking in rural areas around the riding, as well as the smaller communities, mentioning Magnetawan, Orrville, and MacTier, among others.

He indicated the three offices will be aimed at offering campaign volunteers a base of operations in each community, while he remains on the road. As for attendance at community debates, which are already being scheduled, Aitchison wasn’t firm about being at each one.

“I don’t know if we’ve committed to every one of or not, but there are a lot of them,” said Aitchison.

“You try to fit it all in, so I’m sure if I’m not there we’ll have representation at all of them for sure.”

The move to the train station for his office had attracted some scrutiny last week, with the recent exit of the Suzuki School of Music. A report from Muskoka Region had touched on the move of the music school, which was prompted by a change in the cost for the school’s lease.

The ownership of the train station building had passed from the town to a trio of individuals in Huntsville, headed by John Pantaleo. The town sold it to those interests in 2017 for $2.

The town had originally purchased the building back in 2003, and costs to maintain the structure became a concern for Aitchison and council after their election.

Aitchison said that council had reviewed town assets, and decided to focus their energies on the assets that were part of their “core responsibilities.”

“It (the station) was too expensive,” said Aitchison.

“We can only raise taxes so much, and subsidizing a clubhouse for the rail society, or the heritage society, and subsidizing rent for a private music school is lovely, all great things, but at some point you have to make decisions about what you can and can’t do, and so council decided we would get rid of this building.”

Aitchison said the first request for proposals issued by the town for offers on the building didn’t get a response, while the second brought one from the current owners and the Heritage Society. He said the bid from the society had suggested they would run the building, while collecting rent and revenue, and the capital expenses would be borne by the town.

“That was what we were trying to get out of, because it was another $150,000 that we didn’t want to spend,” said Aitchison.

“The other folks said we’ll take it over, and do everything.”

There were conditions to the offer from the business interests, which included the maintaining of the music school’s old lease. According to Aitchison, the new owners wanted to do a new one that reflected the true cost of running the station building, after the school’s old lease expired.

Muskoka Region had reported that cost to be $2500 per month, compared to $800 previously, which the school couldn’t afford.

Responses to the initial story were mixed, though some had taken issue with the campaign moving in.

“They (the school) left, and they’re mad, and now they’re accusing me of some kind of a backroom sweetheart deal, which is absolute garbage,” said Aitchison.

“I get that you don’t like what we did here, that’s what I say to these people. If you don’t like the fact that the town sold this building, and got out of paying for it, that is fine. But to impugn my integrity because you don’t agree with a decision I made is disgusting.”

Aitchison indicated there was no timeline on the current train station owners meeting the conditions on their deal to hold the building.

“At the end of the day, I think council’s primary objective was to stop using taxpayers dollars to fix this building, so we did that,” said Aitchison.

“These guys have invested a whole bunch of money, there is all kinds of commercial cooking equipment in there. They’ve made some progress, I guess they have a way to go, but obviously they need more revenue to make it viable. So, that is their prerogative, and that is what they’re going to do, and the taxpayer is not on the hook anymore.”

In the meantime, Aitchison said the campaign would be there for a couple of months paying “market” rent, which the owners need.

“We’re helping them out.”

The vote will be on October 21st.