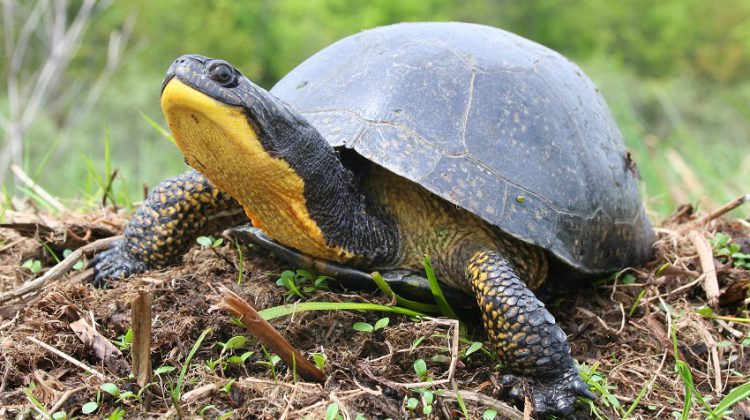 BANCROFT, ON- Watch out for baby turtles in the next few months.

That’s the word from Kelly Wallace, the founder at the Think Turtle Conservation Initiative. She’s warning residents of turtle-country to expect hatchlings on private property, public property, roads, and both rural and cottage communities, as well as the outskirts of urban areas.

Wallace is predicting that hatchlings will appear mid-September, though that’s dependent on a range of factors.

“In a warm year, turtle eggs will develop faster and the hatchings may hatch and emerge as early as mid August. In a cooler year, they may hatch later in the fall. This year has been a bit of a mixed bag starting off extremely hot, followed by consistent warm dry conditions and some regions in Ontario have been experiencing cooler temperatures for several weeks. Point being it is more so a bit of a guess this year but the month of September into October is when we can expect to see hatchlings making a mad dash for their intended body of water.”

Wallace supplied some guidelines for common types of turtle in her message.

(3) Northern Map Turtle – 7 to 23 oval shaped eggs, 60 to 90 days and hatchlings sometimes remain in the nest cavity until the spring, called ‘overwintering.’

(4) Painted Turtle – 3 to 15 oval shaped eggs, 60 to 90 days and hatchlings often remain in the nest cavity until the spring, called ‘overwintering.’

(7) Spotted Turtle – 2 to 8 oval shaped eggs, 55 to 80 days and hatchlings may remain in the nest cavity until the spring, called ‘overwintering.’

“The hatchlings face many challenges once they emerge from their nest to make the journey to their intended body of water,” wrote Wallace.

“Some hatchlings travels may include crossing a road and the risk of getting run over by a car, in addition to this is the numerous potential predators they could encounter between the nest and their intended body of water. Hatchlings that do make it across a road safely may then have to negotiate terrain obstacles such as curbs or fences, others may die from dehydration on a hot day.”

She recommends that drivers pay extra focus to the road when driving through wetland areas, and to enlist passengers as lookouts if possible.

“If you stop to assist a hatchling, juvenile or adult turtle across the road please pull your motor vehicle completely off the road and on to the shoulder as far over as possible and put your hazard lights on,” wrote Wallace.

“Braking for turtles and/or any other wildlife is dangerous as is parking your car in the middle of a lane, both can cause accidents and should be avoided. Make safety your #1 priority! Please think of your safety, the safety of any passengers with you and the safety of other motorists on the road. Having a safety vest close at hand in your vehicle is always recommended and not just for assisting turtles, a safety vest will make you more visible while standing on or near a road.”

She also said that the turtle should be moved in the direction that it’s heading in.

“Hatchlings may be little but they have a good sense of where they are going,” wrote Wallace.

“Admittedly some do seem to end up a little off course and disoriented as mentioned they do face challenges. Always handle hatchlings carefully, their shells are soft and pliable. A firm but gentle grip will suffice while taking take a hatchling to the nearest body of water in the direction the hatchling was headed. Once there please do not release the hatching into open water. There are predators just lying in wait. Scout out the area for a spot that has a shallow area and ideally varying water depths in the vicinity and has vegetation and/or leafy debris that will serve as protective covering for the hatchling. A hatchling will spend much of their early years hiding until they have gained some size and girth and are not so vulnerable to predators.”

She told the MyMuskokaNow.com newsroom that turtles can show up in unexpected places.

“They can show up anywhere, this time of year,” said Wallace.

“I’ve even found one in the Canadian Tire parking lot in Bancroft once, and I have no idea how it got there, and also how it managed to negotiate all the trucks. It’s just a matter of being observant, and keeping an eye out. It’s too bad they don’t have little flags!”

If anyone encounters an injured turtle, they can call the Ontario Turtle Conservation Centre at 705-741-5000.